Global Touring thru a Camera Lens 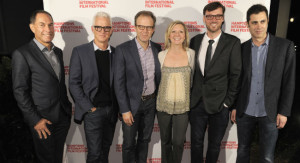 Once again the 2015 Hampton International Film Festival (HIFF) was a huge success, attended by thousands of enthusiastic movie goers during the five-day event. The gorgeous autumn weather was a delight to walk through East End communities, dine at the restaurants and line up outside the theatre showing the films. Besides movies, there were Opening and Closing Night Parties, workshops, lectures, “Conversations with” appearances by noted actors and directors as well as celebrity sightings, everything a film festival should be! It is impossible to see all the movies, so we picked by subject and content. On the topic of subject, HIFF programmers select a wide variety of topics. Some people like movies about social issues, political topics, and controversial subjects or to just be entertained with good story telling and wonderful cinematography. The latter is our preference, but we enjoy documentaries and learning about cultures around the globe. With this thought in mind of global travel, here is an overview of some of the outstanding films we saw during the festival. Many of the HIFF films are soon to be released in theatres or on cable TV. You can visit the HIFF site to see a full list of the film entries and “shorts” for this year. 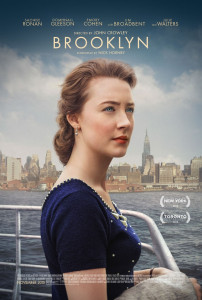 Brooklyn – Billed as a “Spotlight Film”, this movie was both deeply engrossing and cinematically beautiful, directed by John Crowley. From Ireland/UK/Canada it is the story of a young girl, Eilis, (Saoirse Ronan) leaving her widowed mother and older sister in Ireland in the 1950’s and heading to her American dream. She arrives in Brooklyn and stays at a boarding house arranged by her kind parish priest. Eilis finds work in an upscale department store, enrolls in night classes, but is lonely for home. That is until she meets Tony, a young Italian man. An unexpected tragedy forces Eilis to return home and the story line leaves the viewer on the edge of their seat to see if she decides to stay in Ireland or return to Tony who loves her and constantly writes love letters to say he is waiting. Emory Cohen (Tony) was one of Variety’s 10 Actor’s to Watch. When the movie ended the audience applause was unanimous in its approval.

He Named Me Malala – This documentary was made in the USA and is about the life of Malala Yousafzai, a young Pakistani girl who is the youngest Noble Peace Prize recipient. The horrific shooting in 2012 by Taliban attackers and long recuperation process of this advocate for education for women and children’s rights was only part of the story. Directed by Davis Guggenheim, the film delves into her family, they now live in England, and how she combines school and touring the world for her cause. Her father is a strong influence on Malala’s life and their closeness and bond is a joy to behold. The entire world rallied around her and after her amazing recovery she formed the Malala Fund to empower girls worldwide by facilitating access to education with the belief that “one child, one teacher, one book and one pen can change the world.” This documentary was more than a remake of the news headlines, it was a warm storytelling and inside look of this 15 year old and her courage, sense of humor and wonderful family. Some of the best moments of the film were when she was at home, just being a young teenager. Don’t miss this one!

Sherpa – This documentary was one that was on my husband’s list. This combined Australia/Nepal made movie was in its East Coast Premiere. If you have never heard of or wondered what the Sherpa population goes through as guides on Mt. Everest, this film gives a harrowing, insiders peek. Just watching this film and the scary climbing involved assured me, this challenge will never be on my bucket list! Because of a 14,000 ton block of ice that barreled down the mountain in April 2014, 16 Sherpa guides were killed. In this worst tragedy on the mountain, the other Sherpa guides united to fight for respect and better working conditions as their share of profits are not proportional to the risk and work they do. The story shows the tourist adventures, some paying as much as $75,000 a person for the two month climb and what dangers await both climbers and guides. Director / Screenwriter, Jennifer Peedom captures the intenseness of the climb, the tedious and precarious routes the Sherpa guides make to carry equipment, food and supplies for the tourists for the duration of the trip. The photography is breathtaking as is the footage of the dangers on the mountain. Viewers are drawn into the Sherpa life as the film shows the tiny village and those left behind as the men leave to earn enough to get the family through until the next tourists arrive on Everest. Side Note: For those hikers out there, though you might not tackle Mt. Everest, we discovered a boot company, Blundstone, which has the boot for a hiker’s needs. Popular for shoppers at the festival, a shop in East Hampton, Steven Alan, was quite busy with customers trying on boots to prepare for autumn outdoor hiking.

Bolshoi Babylon – This UK documentary made its New York Premiere and was in both English and Russian, produced by Mark Franchetti. When we hear Bolshoi, immediately exquisite dancing and world famous artistry comes to mind because the Bolshoi is one of the most esteemed ballet institutions in the world. The competitive nature of the Bolshoi is a high stakes competition and the climb to the top is intense. Delving into the acid attack in 2013 against its creative director, Sergei Filin, by one of the company’s dancers follows the outcome as if we are watching an absorbing television mystery of intrigue. Director, Nick Read, a British filmmaker known for making acclaimed observational documentaries, had unprecedented access and was allowed to follow the company’s attempt to recover after the incident to redirect the focus back to the talent and artistic brilliance of the dancers.

A Royal Night Out – Another Spotlight Film, this was the North American Premiere, also a UK production, directed by Julian Jarrold. It’s based loosely on a true story, about Princesses Elizabeth (Sarah Gadon) and Margaret (Bel Powley) and their one night away from the palace. (Bel Powley is also one of Variety’s 10 Actors to Watch.) It was Victory in Europe Day in 1945 and the end of the war and the whole country was celebrating. Cheering could be heard in the streets and the young women wanted to be part of it. Their parents, the King and Queen of England relented and “only with two soldier bodyguards can you go out, but in disguise”. Although given a curfew, the girls managed to elude their military chaperones and have an adventure that included drinking and romance. As part of the film’s premiere at HIFF, distributors Atlas Distribution and Ketchup Entertainment hosted a delightful tea for press members. The “English Tea” was held at the charming Maidstone Inn’s Living Room. From the Earl Grey tea, scones, clotted cream and finger sandwiches and desserts, it was an elegant setting to get in the mood before viewing this British based film.

The Lady in The Van – A special nod to this other UK entry and US premiere. It stars the delightful, witty, Maggie Smith and Alex Jennings, directed by Nicholas Hytner. Being a fan of Downton Abby, once I spotted Ms. Smith’s name in the film catalog, I knew this film would be on my list. Based on a true story, by writer Alan Bennett’s (The Madness of George III) Maggie Smith plays an elderly, eccentric high-born woman living out of her van because of an event that happened early in her life. She ends up parked, with permission, in Bennett’s driveway, in order to have an “address to collect social welfare”. This hilarious and witty story shows how two strangers connect over the years that she remained in his driveway and a lasting friendship was created.

Special Thank You – It is an arduous five days covering events that take place during HIFF. Thanks to Clare Ann Darragh and Lina Plath of Frank PR and their team for the help and support during the festival. Their assistance with information, updates and red carpet events were invaluable!