Actors to Watch at the Hamptons International Film Festival 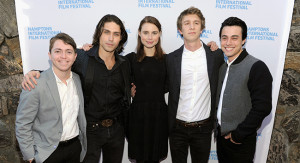 Part of the 10 Young Actors to Watch; here is some of the cast of The Preppie Connection

One of the interesting events we enjoy during the Hampton International Film Festival (HIFF) is getting an opportunity to see in person many of the “rising” actors that are appearing in festival films. Each year there is a panel discussion during the five day festival where guests can listen to these actors talk about their craft. A moderator interviews the actors to discover how they began their careers, what inspired them and how they prepared for their recent role. It is a fascinating peek into this intriguing craft and enviable art form, acting!

Before HIFF begins, Variety magazine publishes its “Annual 10 Actors to Watch”, a title originating back in 1998. Steven Gaydos, V.P, Executive Editor of Variety, says “Actors to watch turn up in edgy little indies, studio blockbusters and from all corners of the world. You’ll see some of these actors in upcoming Awards Season films and you will have seen some of them in current summer hits. We feel they all have one thing in common: uncommonly bright futures.” Past honorees include many future Oscar-winners and nominees such as Viola Davis, Taraji P. Henson, Octavia Spencer, Patricia Clarkson, Samantha Morton, Lupita Nyong’O, Michael Shannon, Melissa Leo and many others.

Over the years, we have attended several of this stimulating conversational panels held in East Hampton. In the discussions were actors like Jessica Chastain, David Oyelowo, Rooney Mara and a long list of others that are now lead actors, recognized around the globe. This year’s honorees will be feted in the October 6th issue of Variety, in conjunction with coverage of the Hamptons International Film Festival, which runs from October 8 -12th. This marks the fourth year Variety has collaborated with the festival to present Actors to Watch. Mr. Gaydos is the moderator for the panel discussions and keeps the conversational lively, entertaining and stimulating for audience members.

David Nugent, Artistic Director of the festival, says, “The Hamptons International Film Festival is delighted to partner with Variety again in highlighting the work of these actors whose work thus far promises bright futures ahead. We have a long history of celebrating the next wave of acting talent at early stages of their career including Emily Blunt, Jessica Chastain, Adam Driver, David Oyelowo and this year’s group is amongst the best we’ve had.” 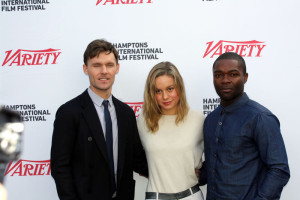 Scott Haze, Brie Larson and David Oleyowo attended the HIFF in year’s past.