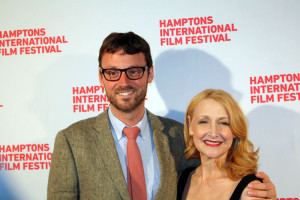 Admittedly, we are movie buffs and watch several each week, either at the movie theatre or comfortably at home with family or friends over for movie nights. While most of our selections are from television cable channels, we also find wonderful films at the Montauk library. Our picks range from popular feature length films, independents, foreign or a collection of “shorts” and our tastes are rather eclectic, to say the least.

In October on the East End the film industry shone particularly bright with the world famous Hampton International Film Festival (HIFF) that was there for five days, what better time to offer recommendations for other film buffs? Here are some of my recent favorites, listed in alphabetical order, first by home viewing and then by current theatre releases.

Directed by Tommy Lee Jones, the Homesman is based on the novel by Pulitzer Prize-nominee Glendon Swarthout. When three women living on the edge of the American frontier are driven to the brink, the task of saving them from their surroundings falls to the pious, independent-minded Mary Bee Cuddy (Swank). Transporting the women by covered wagon to Iowa, she soon realizes just how daunting the journey will be, and employs a feisty low-life drifter, George Biggs (Jones), to join her. The unlikely pair and the three women (Grace Gummer, Miranda Otto, Sonja Richter) head east, where a waiting minister and his wife (Meryl Streep) have offered to take the women in. But the group first must traverse the harsh Nebraska Territories marked by stark beauty, psychological peril and constant threat. The movie’s summary is certainly intriguing!

This film was billed as a Centerpiece Film in the 2014 HIFF and Miss Swank was seen throughout the festival at both the premiere and a “Conversations With” session held at the Bay Street Theatre. Warm, outgoing and quite personable, audience members had an opportunity to listen to her opinions, talk about her craft and the various activities the actress is involved in. Her film, Homesman, was a true to life, gritty picture of the old west depicting how difficult it was for women in this time period. Both Swank and Jones gave touching performances and this drama was certainly a cut about most westerns because of its subject matter. This film has been released for cable network viewing and can be seen on Netflix. Be sure to catch it if you subscribe to this streaming system.

At the 2014 HIFF this was billed as a Spotlight Film and lead, Bill Murray, was in attendance for the premiere. The film has now been released on a cable channel after its run in movie theatres. Also in the film are Naomi Watts and the talented child actor, Jaeden Lieberher. The film’s description reads, “A young boy whose parents have just divorced finds an unlikely friend and mentor in the misanthropic, bawdy, hedonistic war veteran who lives next door.” Billed as a “dramady”, this semi-serious film is bound to touch viewers in an unexpected way at the film’s conclusion.

When her husband of twenty years walks out on her, Wendy Shields (Clarkson) watches her comfortable life crumble overnight. Struggling to reclaim her independence in New York City, she hits a unique roadblock: she never learned to drive. Her life is forever changed when she meets Darwan (Kingsley), a driving instructor and part-time cab driver on the brink of an arranged marriage. In each other’s company, Wendy and Darwan find the courage to ask for directions, the strength to move forward, and a friendship for the ride.

It is a winning combination with these two actors, Clarkson an Academy Award Nominee and Kingsley an Academy Award Winner appearing together in this sensitive film about two people finding strength in their troubled lives. As her film bio reads “No matter the role, Clarkson brings intelligence, dedication, and her unique sense of empathy.” For Sir Ben Kingsley, we have easily recognized that if his name appears in a film, it will be one that is engrossing, well acted and appealing for viewers that seek intelligently written scripts.

This adventure, drama, thriller was written and directed by Frank Hall Green and has appeared the last year at over twenty film festivals around the world. The film’s public release into major theatres happened at the end of September. We met lead actor, Brian Greenwood several times at his red carpet appearances and after the film’s Q & A session at last year’s HIFF. It was the films World Premiere. Mr. Greenwood was friendly, outgoing and very approachable to both press and well wishes that saw the movie and had a comment or compliment to share. It was a pleasure to see someone that just starred on the big screen in a fantastic film being so openly cheerful and excited to be at the festival. I say this as in some cases members of the press have seen celebrities appear to be “going through the motions” of making an appearance at this type of event. Both he and director, Frank Hall Green were obliging and welcoming to inquiries about the film or festival events. As described in the film’s summary, “A beautiful trek into the stunning Alaskan wilderness, Wildlike follows 15-year-old Mackenzie on her first visit to the last frontier. When her stay with ‘Uncle’ takes a traumatic turn, Mackenzie must embark on a dangerous journey through the wilds alone. On her way she encounters another lone traveler (Greenwood) and together they offer one another something that cannot be found on any map: a chance at salvation. Though somewhat similar in name to a film released at the same time, Wildlike seems to have a more universal appeal, as shown by its many festival entries. It is a thrilling and emotional journey that touches the viewer while at the same time continues to awe the senses seeing the powerful beauty of the Alaskan terrain. 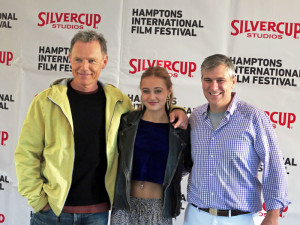 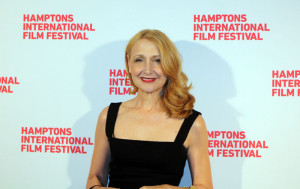 Patricia Clarkson, appearing at the Hamptons International Film Festival in 2014 along with her film, “Learning to Drive.”