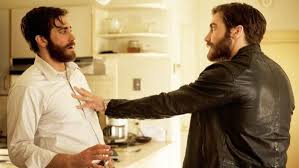 “Enemy”, a Canadian film from 2013, knows how to hold the viewer for its hour-and-a-half running time. I caught it on Netflix the other day, and it’s definitely worth seeking out. It is a good illustration of a perennially popular genre film that I call the “psychological puzzler”.

Directed by Denis Villeneuve, it stars Jake Gyllenhaal, in a remarkable dual-role performance: as a history professor, single but with a beautiful blond girlfriend, and his exact double, an actor whose beautiful blond wife is expecting their first child.

Another Canadian, David Cronenberg, is a master at this kind of thing. Spider, for instance, takes you so deep into the mind of its demented hero, who may or may not have murdered his mother as a child, that you’re never sure that what seems to be real is not the byproduct of dementia. But the main character here is no social misfit. While Alan, the history professor, is noticeably depressed and joyless, he still functions normally. For Enemy, the dramatic development relies on putting the audience in the position of a relatively normal person who is suddenly confronted with an unexplained shock to his perception of reality. 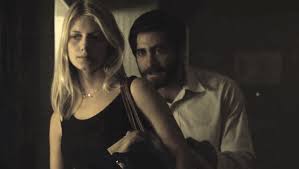 Melanie Laurent as Mary and Jake Gyllenhaal as…which one? foto:thisisbarry.com

The story develops slowly, with a dark, throbbing score. And it’s not unbelievable, although certainly odd, for two men who never met to be exact doubles of each other. Gyllenhaal skillfully shows us two entirely different characters, with very different demeanors. The costuming helps too; the history professor seems more unkempt, absent-minded than the actor, who usually looks dressed for an audition. And yet, the shocking, yet inconclusive ending makes us doubt what we have seen. A clue: the film opens with a visit to an underground sex club, featuring a huge, nasty spider.

What I find so rewarding and seductive about this kind of film is that, as a confident, rational man, I tend to reject the supernatural as dramatically unsatisfying. As skillful a storyteller as he is, Stephen King’s approach is not as rewarding.  Supernatural stories depend upon an acceptance of an unseen universe that operates according to its own laws. Hidden from the rational order, its sudden invasion is terrifying, and nearly always violent. Vampires and zombies live in that world, and they can have it. What I find more terrifying is the takeover of a normal human mind by an obsession, an irrational fear of something that, for no apparent reason, has targeted a person for destruction. Rosemary’s Baby works so well because every one of the odd occurrences that only she seems to notice can have a rational explanation until, of course, Levin flips the story into the realm of theological fantasy. Ari Aster’s Hereditary is another, more recent example. Are the demons real, or just the extension of psychological fears that we submerge in order to function normally?

Enemy operates on a simpler level. The suspense comes from watching each man, both alone and in the same room with his double. The story is entirely played out in the face and manner of the actor; we watch him breathlessly. Gyllenhaal makes us believe that they are different men; yet, at the same time, we question whether they are both real.