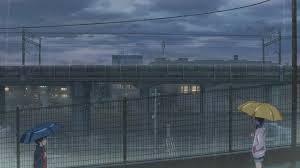 Like many others, I went to Makota Shinkai’s new film, “Weathering With You” with both hopefulness and unease. It was his follow-up to the glorious “Your Name“, an international blockbuster, which I saw last year. The earlier film had prepared me to expect sophistication, wondrous animation and psychological depth, which are distinguishing aspects of his talent. But also, as with the discovery of any new and original artist, you wonder if the magic can continue. With “Your Name“, the delights were fresh and unexpected; so much of our appreciation depended on the surprise of discovery. Alas, that kind of delight can never be repeated; and the new film didn’t for a moment make me think otherwise.

Having gotten that out of the way, “Weathering With You” is still wonderful, and worth your time.

It opens with images of Tokyo in a drenching rain, one that has gone on longer than anyone can remember. The people are miserable, and fearful of the future. There is talk that Tokyo will be totally submerged. But a sixteen year old boy, Hodaka, has come to Tokyo, penniless, to live on the streets until he finds work. He ran away from his home in the outer provinces to seek an independent life. The film never brings up any conflict with his parents, and they never appear.

To escape the rain, Hodaka seeks shelter in a men’s club. When a waitress sees Hodaka, starving and obviously homeless, she leaves a sandwich for him, smiles, and disappears. Hodaka cannot forget her smile; he must find her.

But then, through luck, Hodaka is picked up by a gruff and rude man, Suga, who gets him to work for his gossip website in exchange for a bed and meals. Natsumi, a pretty, free-living girl also lives with Suga, and she goes with Hodaka on reporting assignments. They interview an elderly woman, a seer, who speaks of “sunshine girls” who have the ability to stop the rain through Shinto prayer.

Hodaka becomes satisfied with his life. Suga is gruff and critical, but he learns a lot from him and is becoming confident. So far, the threatening tone of the film, dominated by the torrential rain, is relieved by our involvement with Hodaka. He is a likable if average boy, whose circumstances put us in sympathy with him. The next event – his meeting with the girl from the club – is not particularly dramatic, even though it soon leads to an entirely different tone for the rest of the film.

He sees her being assaulted by two men on the street. He charges at them, and she escapes with him. She says that one of the men is her boss, who wanted her to do sex work for the club, which she refused to do. Her name is Hina, and she is eighteen years old. They establish a warm, friendly relationship; as the older one, Hina says she demands respect.

As in “Your Name“, Shinkai has involved us early on in a story about young people at a crucial point in their lives. His talent – made all the more remarkable because the story is told entirely in animation – is making these young people believable. The animation allows us to focus on their natural, universal attributes as expressed in facial expression and tone of voice. There is much dialogue and, even when subtitled, there is a tone of intimacy in the relationships that feels totally real. This comes through even in a foreign language. It explains why Shinkai spends so much time casting his voice actors. As a result, the audience, even non-Japanese, stays with the story even when it veers into quasi-religious mysticism.

From a brief prologue, we know that Hina is a sunshine girl, and can stop the rain with prayer. When Hodaka learns this, he tells Suga, who is gleeful. Suga designs a huge media campaign, and instructs Hodaka and Natsumi to spread the word everywhere in Tokyo that, for a price, Hina can deliver sunshine for brief periods. Weddings and outdoor expos are especially popular. Profits are rolling in. Suga is immensely relieved because his imminent divorce is very expensive, and now he can sue for joint custody of his five-year old daughter. 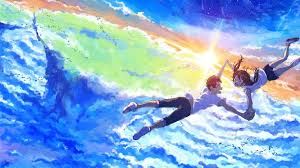 This middle part of the film is lighter in tone; the satire staying just this side of nasty. But then, a crisis. The rains return, more threatening than ever. Hina knows, from Shinto legend, that only the self-sacrifice of a sunshine girl will make it stop. She stands before a shrine atop a city building, prays, and waits. Rising into the clouds, she is brought to a place in heaven to await her sacrifice.

Although Shinkai’s views of the skies are beautiful throughout the film, this section is breathtaking. The tone of the story changes to one of spiritual ecstasy. But then, rather jarringly, the story returns to Hodaka, who is determined to save Hina. This part of the film, the weakest, follows Hodaka as he tries to go to the shrine to get her back. The police, who have been looking for Hodaka as a possibly dangerous runaway – especially after they see him with a loaded gun that he found – trail him to the shrine, and only Suga’s intervention lets him get to the roof of the building. He finds the shrine, and the film’s final section is one of a near abstract celebration of the power of first love.

Telling a complex story, with believable characters involved in a struggle where the forces of nature are at war with each other, is no small achievement. If an audience finds itself entranced in such a story, it is likely holding out for a happy ending. Shinkai certainly delivers on that. Not only is Tokyo saved but, more significantly, the lovers are blessed with a future together. But to get us there, Shinkai demands that we share a heart-stopping moment with them: Hodaka and Hina will leap from a cloud, hand in hand, to the earth below, relying on faith alone to save them. The entire film had built up to that moment, and Shinkai relies on all of his skills in animation, color, music and dramatic power for its maximum emotional impact.

Shinkai’s films are so challenging because he dares the audience not to share his belief in a world that survives due to a predetermined natural order, a reverence for tradition and – most astonishing of all! – the faith and hopefulness of human nature.

Postscript: After the Oscars this year, who can doubt that Asian cinema dominates. It is also clear that its success is very dependent on the great Western filmmakers of  the past. The most Hitchcockian film of recent years is Lee Chang-dong’s “Burning”; the most Billy Wilder-ish is Bong Joon-ho’s “Parasite”. And now, with Makoto Shinkai, the enormous influence of Frank Capra and Leo McCarey is unmistakable.