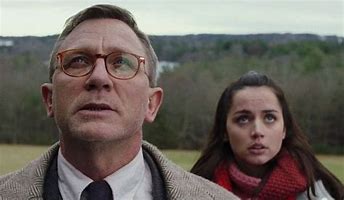 Daniel Craig and Ana de Armas in “Knives Out” foto:film-book.com

“Knives Out”, written and directed by Rian Johnson, has an Oscar nomination for Johnson’s original screenplay. The critical and commercial success of this immensely gratifying whodunnit is due, in very large part, to the fact that they don’t make them like this any more. At least not for the big screen. The enormous popularity of “Murder She Wrote” on network television had the effect of chilling any prospects for the genre anywhere but the small screen; too risky. But the appetite was always there for a good, smart detective story, in the British model.

And don’t be mislead, although set in America, “Knives Out” is clearly based on the British model, as was “Murder She Wrote”. And the casting of top Brit Daniel Craig as the detective hero – despite his playfully phony Southern accent – seals the deal. The major concession to current taste is its front-and-center use of race discrimination as part of the mystery. But this is no clumsy PC add-on. It fits in neatly with the more traditional motives of greed and jealousy.

Neatness does not mean subtlety, however. These are all one-dimensional characters, craftily integrated into a comfortably familiar sub-genre: the murder of an eccentric multi-millionaire by any one of his greedy family, who are all waiting for him to die. The aging oligarch, Thrombey, as played by Christopher Plummer, delights in writing murder mysteries, which has made him enormously wealthy. Now retired, he spends his dotage being cared for by a young nurse, Marta, played by Ana de Armas. Raised by her immigrant mother – who is undocumented – Marta is painstakingly professional, and fiercely devoted to Thrombey, who feels closer to her than to his family. In fact, he’s sick of the lot of them.

First off are two adult children, who are now middle-aged: Linda, played by Jamie Lee Curtis, who runs a company she started with her father’s money, and Walt, played by Michael Shannon, who runs his father’s publishing house. The third child, a son, is dead but his widow, Joni, played by Toni Collette, and her teenage son, have ensconced themselves in the huge mansion to feed off of Thrombey’s  wealth, just like the rest of the family. Linda’s husband, Richard, played by Don Johnson, fits in with the useless bunch, as does their son, Hugh. But Hugh, played by Chris Evans, stands out as the only one to openly scorn Thrombey’s wealth, even as he enjoys living off of it. An unapologetic rascal, he seems to relish the fact that nobody in the family can stand him, even his own parents.

Standing above this ugly spectacle is Daniel Craig’s Benoit Blanc, a phenomally successful private detective, who even has his own profile in the New Yorker. With an accent described by someone as “KFC”, Blanc serves as the the brains and conscience of American justice, and Craig customizes the fit to perfection.

It begins with Thrombey’s eighty-fifth birthday party. The family goes through the motions with studied hypocrisy, even though Thrombey had expressed his contempt for all of them earlier in the day. But then, the next morning, he is found dead, his throat cut, with the knife still in his hand. The police think it’s suicide, open-and-shut, but Blanc, who has been allowed to attend the police investigation because of his fame and expertise, disagrees. Blanc is there because an anonymous client has sent him an all-cash retainer to join the investigation. Eventually, the mystery client will be revealed as a murderer, and the clever, twisty script holds the audience in thrall until the crime is solved, naturally, by Blanc.

What is most original in the film is its heroine, Marta. We are immediately aware that she is trustworthy because of a peculiar characteristic: if she ever tells a lie, she becomes nauseous and has to vomit. When Blanc learns this, he immediately uses it to test the honesty of the possible suspects. He knows that Marta feels emotionally connected to the family members, and will try to protect them, even though they secretly have contempt for her as the daughter of an immigrant. That means he knows what to look for: if she confirms what a family member told her, but she knows it’s a lie, she’ll vomit afterwards. Poor Marta spends a lot of the film standing over the sink.

In the first half of the film, the technique is to slowly reveal the whereabouts of each of the characters at the time of Thrombey’s death. The suspense comes from seeing how Blanc interviews them: with good-natured affability…until, that is, he finds an inconsistency. Then he’ll pounce. But the mechanics change in the second half, when it’s revealed that Thrombey changed his will to make Marta his sole heir. We find out, too, that at least one family member knew this before Thrombey’s death. The new focus becomes to find out how the killer tried to make Marta an unwitting accomplice. The solution hinges on the fact that Marta thinks she caused Thrombey’s death by accidentally giving him the wrong medication and that, when she told him he was fatally poisoned, he committed suicide. Marta is wrong, of course. To our delight, Blanc exposes the criminal in front of the full gathering of suspects, to their shock and horror.

But the film’s real impact rests on another scene. Once it’s revealed that Marta is the sole heir, she appears before the entire family and apologetically tells them that she feels close to them, and that they are entitled to some of the money. But Blanc, previously so temperate and civil, erupts with outrage. It is the payoff moment, the franchise moment of the entire film, and Craig is something to behold. Cutting her off and lording over the seated, cowering hypocrites, he loudly exults in their defeat, and in their humiliation at having to beg from someone they had always despised as an inferior.

Craig must have felt some inner satisfaction in that scene. After all, as James Bond, he could deliver a face-flattening punch to a mass-murdering evildoer, but was still expected to keep his cool; showing the face of a seen-it-all professional. But that villain was just your everyday psychotic killer. As Blanc, however,  the embodiment of true justice, he’s not able, or expected to hide his rage. Not when verbally attacking a bunch of lazy, pampered greedy racists. In that moment, Craig delivers a face that is brutally hot and ugly, which the story demanded. I look forward to seeing that face again, in the next film of the franchise. I’m sure that Blanc will give it to someone who deserves it.