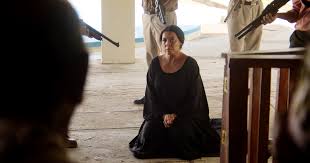 “Birds of Passage”, a Colombian crime drama which has gotten serious attention from critics, is both unusual and ambitious. Co-directors Cirro Guerra and Cristina Gallego, whose previous film was “Embrace of the Serpent”, have used a contemporary genre as a kind of anthropological document of a primitive society. From a script by Maria Camila Arias and Jacques Toulemonds Vidal, the film chronicles the development of the drug trade in Colombia from the 1960s through the early 80s. It apparently began with an indigenous tribe, the Wayuu, who had lived an isolated existence for centuries.

The film opens with the emergence from isolation  of Zaida, the daughter of Ursula, the tribe’s matriarch. According to ritual, Zaida has been sequestered since puberty as a prelude to finding a suitor. At the ceremony, she is joined in a mating dance by Raphayet, which is the ritual for requesting her hand. Raphayet’s uncle is Peregrino, who is a respected “word messenger” to the other clans, but Ursula thinks the suitor is inferior anyway. While she agrees to the match, the dowery is so brutal that Raphayet is forced to get the money by selling marijuana to some Peace Corps volunteers. He gets the “wild grass” from a neighboring clan led by his cousin Anibal, who is himself a patriarch. The deal is a success, and Raphayet teams up with his buddy, Moises, an alijuna, or outsider, to develop a trade selling marijuana to gringos. Alijunas are held in contempt and avoided as dangerous by the Wayuu, and Ursula is horrified that the tribe is involved with them. But the uneasy partnership with Anibal’s clan, which results in using a number of Alijunas  as the business grows, allows both groups to prosper. As a result, Raphayet becomes the leader of the Wayuu.

But the uneasy truce is broken, finally, when Moises becomes violent at a drug delivery to a buyer. The deal with the Wayuu requires that they be the only supplier. But when it is revealed that the buyers have another secret supplier, Moises kills them. Raphayet is appalled, but knows there is no turning back. He knows that Ursula will demand that he kill Moises because the spirits of the murdered men will be released into the tribe to demand retribution. When Raphayet complies with Ursula’s demand, it precipitates a bloody war that takes a tremendous toll on both clans.

Some of the film holds one’s interest because of the filmmakers’ scrupulous attention to detail. Within their territory, which is surrounded by mining and commercial industry developed by the Spanish, the Wayuu are a people lost in time. Tribal religious practices and customs of fashion are unchanged for centuries. The filmmakers use the indigenous people of that region, in their exotic costumes, to show their racial homogeneity. This lends authenticity to the somewhat confusing story. The Wayuu have electricity, cars and guns, but live a very ritualized, isolated existence where conduct is limited by severe rules of behavior. The dead are a constant presence, and Ursula dominates with her thorough knowledge of tribal ritual and superstition. Above all, the dead cannot be offended or the results will be disastrous. 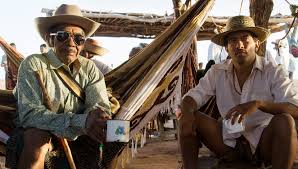 As in traditional epics, the broad outline of the story is introduced early, and the filmmakers design the film to enthrall us at the unfolding of events.  We’ve been prepared to expect an outcome that will be tragic and a shocking waste of life. Also, as a crime drama about the drug trade, we can expect horrific violence. Our continued interest depends, however, on our involvement with the characters. But in this, the film comes up short.

The cast includes many non-professionals, but the major roles of Ursula, Raphayet, Zaida and, to a lesser extent, Anibal, are with experienced actors. For a variety of reasons, their performances fail to provide the intensity needed for the main conflict. Carmina Martinez is impressive visually as Ursula, and has forceful moments, especially at the loss of her grandchildren. But the role is written and played in one dimension: first give warnings and demands, then just skulk away until it’s time to make them again. There is little sense of inner conflict, of the guilt from leading her people to ruin.

But, more importantly, Jose Acosta is hopeless as Raphayet. His personal ambition has no passion to it, no appetite. When he was onscreen, I tended to shift attention to the costumes and decor. Juan Bautista, as Anibal, shows the limits of the filmmakers’ conception. He is directed to stand like a totem pole, with as much expression. But he conveys no menace or threat, only bluster. As for the beautiful Natalia Reyes, as Zaida, she has the same expression when playing with her children as when, in another tribal ritual, she is scrubbing the bones of an exhumed corpse. The entire cast, in fact, rarely seems lifelike in movement, and, for the most part, just stand around listening to each other talk.

If I’m being too harsh, it might be because the film is presented as a kind of sweeping historical epic, reeking of scholarship. There is almost no suspense, and the violence is mostly unseen; you’re just shown dead bodies lying in the road. Typically, when a rape occurs, prompting even more retributive killing, it is offscreen.

While watching the film, I had a vague sense of a similar feeling, from many years before. Then I remembered: my public school class went to museum exhibits of native American tribes. We saw mannequins in native clothes standing next to stuffed wildlife before a painted backdrop. Despite a lot of hopeful ambition, this film had no more life to it than that.