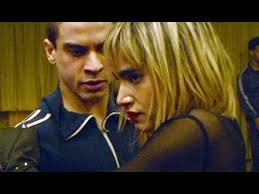 After five features, it should be evident by now that the controversial French-Argentinian filmmaker, Gaspar Noe, is a rigid formalist. His latest, “Climax”, which was previewed at last year’s Cannes festival, is as formalized and anti-dramatic as any of his previous features. It presents sex and violence as irrevocably combined, resulting in destruction and guilt. The characters are compulsively, almost blindly drawn into acts of joyless debauchery and violence, and come to regret it afterwards. Some have called him a moralist, but that’s not quite right. He consistently refuses to present human behavior in any judgmental way. Human action is in constant vacillation between appetite and disappointment, and both are equally natural. And meaningless.

The film was apparently inspired by an incident in the mid-nineties. A troupe of French dancers will be leaving for an American tour, and their excitement is palpable. We are first shown clips from their filmed interviews for the tour. The choreographer, Emmanuelle, played by Claude Gajan Maull, is famous and intimidating; we hear her questions in the background. We see a racially diverse group, but are all young and, even when shown just sitting in front of the camera, in fantastic shape. We next see an extended dance sequence, to a throbbing technomix,  in which the troupe engages in wildly imaginative, acrobatic choreography, with frequent solos that seem to push bodily endurance. The sequence is interminable, but the camera captures it all without a single cut. 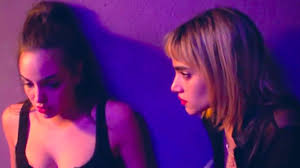 The next major sequence is a roving eavesdrop on the dancers chatting amongst themselves. It is mostly about sex, of course; who’s doing whom, who they’d like to do, and which couples are likely to split. The guys’ gossip is filthier than the women’s, but not by much. The two black African men talk the filthiest, and are the most entertaining. The two blonde lesbians are painfully unravelling; Psyche, played by Thea Carla Schott, statuesque and quietly dominant, the other, Gazelle, played by Giselle Palmer, smaller, and insanely jealous. David, played by Romain Guillermic, a handsome French native, seems to have the most deep-set hostility to the world; thus, he is the most unsettling, and riveting. Selva, a sinewy blonde played by Sofia Boutella, is his obsession. She alternates from dismissive, to maddeningly coy.

We are thus led to expect  a number of small explosions of melodrama. Intriguingly, Noe films the next extended dance sequence from overhead. It is as frantic as the last one, but we can now differentiate the dancers better, and somehow couple their earlier comments with their movements on the floor. 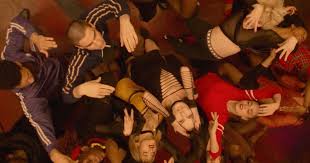 The troupe in revelry foto:backseatmafia.com

Next comes the big party, which will take us to the titled moment of the film. Noe has clued us in from the first shot – of a young woman wandering in the snow, howling and bleeding – that the promised “climax” will be a disaster. Emmanuelle, the choreographer, has made a tub of sangria, which everyone indulges in, including her four year old son, Tito. The music starts, controlled by Daddy, the DJ, played by Kiddy Smile, who is black and huge. His teenage son, a gay virgin, confides in his father that he intends to be deflowered by David. The troupe soon gets into partying mode, the dancers gyrating with increasingly wild sensuality, which is fueled by the coke brought by several troupe members.

Spoiler alert: the punch is spiked with LSD. Actually, it’s not much of a spoiler because almost nobody is shown not drinking the punch. The plot, such as it is, sets us up for who will freak out, and how it will affect the aforementioned conflicts. A couple of other red herrings are also dropped in, and rather clumsily: Emmanuelle is terrified that Tito drank the punch, so she locks him in a closet; Lou, played by Sheila Yacoub, who didn’t drink the punch because she’s pregnant, is suspected of being the one who spiked it. And of course, the ending has got to reveal the real culprit.

With such a thin storyline, the conflicts play out somewhat predictably, but there’s enough energy from the talented cast to keep us watching. And yet, it is the very thinness of the story that allows Noe to demonstrate his greatest strength. Whatever the level of performance – and it is uniformly high in “Climax” – the true star of his films is always the camera. It is as much of a character as anyone else, and it upstages the cast shamelessly. The set was designed to permit the maximum freedom of camera movement. We become the most hungry, the most voyeuristic of all the party guests, and we can see the action from a perspective that none of the debauchees can hope to match. In fact, part of the fun is in imagining Noe – who shot it all himself – hanging upside down or lying on the floor to get all the crazy angles we’re seeing.

But – be not mistaken – whatever we do see is “spontonaiety” that is as pre-conceived as possible. These gorgeous people seem dangerous, to others and to themselves, but Noe doesn’t seem to care if we have an emotional stake in what happens. He has no interest in character development or motive. For these are not merely exceptional dancers, but total performers at a very high level of discipline. He has so carefully defined what he can expect from each of his dancer-actors that he is able to, confidently, capture a visually arresting image wherever he moves the camera. It’s a win-win for him, and I’m certainly not complaining. It is cinematic action for its own sake; dramatic suspense is irrelevant. 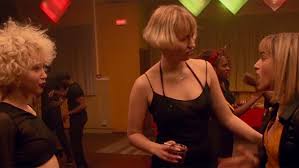 And can this troupe ever perform! Sofia Boutella, in particular, is simply awesome. As Selva succumbs to the influence of the LSD, her frantic paroxysms – as when she slams her body repeatedly against the walls of the set – are thrillingly precise. Mostly, I think, because her “breakdown” is thoroughly professional. It doesn’t matter that Noe reputedly never told the actors where to stand or how to move. Boutella knew, instinctively, as did the others. In terms of sheer theatricality, her performance would fit perfectly within a production of a Racine tragedy at the Comedie Francaise.

And yet, what we’re left with, at least in terms of the meaningfulness of the story, is unsatisfying. A “non-judgmental” perspective is not the same as a humanist one. Sex and drugs can be liberating and fun, but also destructive and ugly. At least that seems to be his take on it.

Well, I’m comfortable enough with that to admit that the spectacle was enjoyable on that level. The level of entertainment product, that is. I think that those who take him as a serious artist, as one who can disturb people at a profound level, are being taken in. Some, in fact, may be “outraged” by the film, and Noe has probably come to expect, and even to enjoy that. Their negative reviews will only enhance his “bad boy” reputation. But it’s very possible that my final words will enrage him more than any of them: that seeing “Climax” was, for me, an altogether pleasant and harmless experience.