Today, one of the most universally despised cultural targets is the art world, which seems to prosper from cynically exploiting the public’s appetite for the “new”, the undiscovered genius who will “disrupt” the snobby elites who control the business. This viewpoint has been expressed in recent films, including Ruben Ostlund’s “The Square” and “Boogie Woogie”. Now, Dan Gilroy has overlaid this perspective onto the terror film template in “Velvet Buzzsaw”, which stars his wife, Rene Russo, and Jake Gyllenhaal, both of whom starred in his previous film, “Nightcrawler” (reviewed FFS 12/5/2014). The most obvious precursor is “The Final Destination” series. The result is a clever, somewhat suspenseful chiller with enough truly unlikeable characters to entertain us when they meet their nasty ends.

As in “The Final Destination”, part of the fun is seeing how each murder is set up. In the “Destination” series, it’s how seemingly unrelated phenomena are “randomly” coordinated to make the death look like a total accident. Here, the set-up is different. With some nifty special effects, the art works themselves turn into the killer, often catching the victim in moments of aesthetic ecstasy.

Gilroy sticks to his game plan. Most of the characters seem to have been written, and the actors who play them directed, to irritate the audience. Jake Gyllenhaal plays Morf, a pretentious and arrogant art critic; Rene Russo plays Rhodora, a gallery owner competing for hot new talent; Zawe Ashton plays Josephine, her African-American assistant, ambitious and calculating, who starts an affair with bi-sexual Morf to gain leverage in the art world; Gretchen, played by Toni Collette (in a fantastic wig!), is a museum curator looking to start her own gallery; Tom Sturrridge is Dondon, a rival gallery owner; and Bryson, played by Billy Magnussen, is an all-around stooge for Rhodora, who has secret plans for his future.

Merely opportunistic, but comparatively normal, is Coco, played by Natalie Dyer. As Rhodora’s intern, it is suggested she is too young to have been corrupted as much as the others. But give her time. Finally, there is Piers, an artist of repute who is disgusted by the decadence around him – but not enough to reject its rewards. It says a lot about Gilroy’s take on the art world that Piers, the only major character to exhibit even the slightest hint of integrity, is played by John Malkovich.

The plot, once it gets going, is fairly simple. Josephine is on a staircase landing in her apartment building when she spots what at first looks like an art exhibit – but it is a dead body. An upstairs neighbor, Ventril Dease, jumped to his death onto the landing. After she calls the police, Josephine enters his unlocked apartment, where she discovers dozens of paintings, which she immediately recognizes as works of genius. She takes them all, and begins the plot to become rich and famous from them. 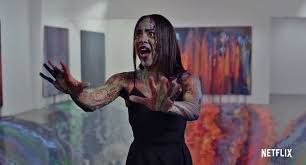 All of the major characters then become involved, and each one tries to grab their own piece of the pie. The paintings are dark, intriguing and powerful. There’s no telling how much they’ll fetch at auction. But soon, the film hints at something mysterious about them. Perhaps it has something to do with Dease himself. A disturbed child, he murdered his father, was institutionalized and escaped. As a reclusive artist, self-taught, he nurtured a grudge against society, but especially the parasites of the art world. From his personal notes, it seems he didn’t want the paintings to be sold. In fact, he predicted a dark outcome for whoever tried to sell them. Then, we discover some kind of undercoat beneath the layers of paint; what can it be? When one of the paintings self-ignites, it seems there’s something chemically unstable about them.

Or is it something else? One way or another, all of the characters come to regret ever seeing them. But only Morf ever makes the connection between the grisly, unexplained deaths of so many of his acquaintances, and some other-worldly avenging “spirit” that survives after Dease’s suicide.

Crisply edited, the choicest bits are memorable, and pop up unexpectedly: a scary car crash; a funeral where everyone talks as if they were at an art opening; Jake Gyllenhaal’s delicious entrance at a gallery party. And, of course, the murders themselves, which I won’t mention in detail. One quibble here: while the “sphere” is a clever symbol of what passes for a modern “masterpiece”, it is too obviously perfect as a murder weapon to give us a shock.

While the first forty minutes or so have their snarky pleasures, it takes too long for Gilroy to clue the audience in to what is going on, which is original and witty. The initial conflict is only between a set of pretentious poseurs; we’ve seen how such types devour each other before. So we wait to be pleasantly amused, but that’s all. Gilroy’s gamble, which pays off, is that the patient viewer will get some nasty surprises. I’m glad I stayed for them.