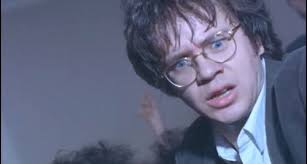 “Jacob’s Ladder”, directed by Adrian Lyne from a script by Bruce Joel Rubin, was released in 1990, but I didn’t see it then. I only recently chanced upon it, in progress, on HBO, and was impressed enough to turn it off, so I could see all of it from the beginning. I’m glad I did that, in spite of the film’s central problem.

The problem is, simply, that the ending is a cop-out. The filmmakers knew that, and felt it worth making anyway. They figured that, by any standard, the ending would be unsatisfactory, yet the experience of seeing the film would be worthwhile. I agree. I’m glad I saw the film, and I’ll try to make a coherent case for that judgment.

It opens in Vietnam, 1971. A squad of American soldiers are alert, but idling. Jacob, tall and bespectacled, played by Tim Robbins, is appealingly shy, yet friendly. Suddenly, there is a roaring attack from an unseen enemy. Confused, Jacob runs off into the jungle, when an enemy runs up and stabs him, critically, with a bayonet. He stumbles off, calling for help as he falls. Then we see him being pulled up into an Army helicopter.

In the first of many jarring jump cuts, we next see him riding in a New York subway car, late at night. He gets off the train only to find himself locked in the station. At first frustrated, then terrified, he finally exits to the street. His face had shown the same look of terror as in the Vietnam jungle.

Over the next hour and a half, we see Jacob trying to make a normal life for himself after his recovery and discharge. He is a postman living with another postal worker, Jezebel, played by Elizabeth Pena. He is divorced, and struggles to maintain contact with his two young sons; a third son, we discover, had been killed in a traffic accident.

He and Jezebel are very much in love, and she offers much-needed support for his wartime trauma, but the relationship is strained by it nevertheless. By turns catatonic and violent, Jacob is pushing her to the limit of endurance. At first, Jacob thinks that his sudden hallucinations and blackouts, while horrible, can eventually be cured by therapy. Gradually, however, after a series of mysterious and shocking events, he comes to believe that he is being pursued by government agents out to kill him. Incredibly, he finds that the other surviving members of his squad are experiencing the same things; they hire a lawyer to force the Army to reveal a possible conspiracy, but then the lawyer simply withdraws, without explanation.

At that point, he gets a call from a man who has information about what happened in Vietnam. When Jacob meets him, we see it was someone we saw in the rescue helicopter.

A word about Adrian Lyne. A director can make a successful film by appealing to the audience in three ways, usually in some combination thereof: to the mind, the heart and the gut. In this film, like his contemporary the late Alan Parker, he again proves a master of the third. He also succeeds, admirably, in the second, which is somewhat new territory for him. It would be interesting to see him test himself with a story that also challenges the mind, but I don’t think he really cares about that. And certainly, the multitudes who buy tickets for his films don’t.

The climax of the film is shocking and moving, yet I felt somewhat stranded. The hints of conspiracy, including the secret use of experimental drugs on Jacob’s squad, are left unexplored. The ambiguous ending leaves open the possibility that it was only in Jacob’s imagination. But you can decide that for yourself.

In spite of this, I can recommend the film because it allows you to become intimately involved in Jacob’s struggle, mostly due to Robbins’ brilliant and enormously appealing performance. What’s more, you feel that – in spite of the ambiguous ending – the film’s viewpoint is strongly focused on its broader theme: that the war itself was terrible enough to destroy the minds and bodies of its victims. even without secret government conspiracies.