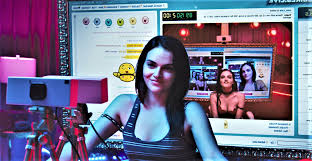 This is a tough one. Yet, despite serious story problems, I recommend “Cam” for its unusual subject, its swift and often exhilarating pacing and the fervent performance of Madeline Brewer in the lead role.

But the main story is how another girl, who looks exactly like Alice, steals her account and pretends to be her. Alice first finds out at her brother’s birthday party, when a classmate sees the site and, thinking it’s Alice, passes it around to the other boys, causing a fistfight with Jordan and forcing Alice to run from the party.

Suspense is maintained while Alice desperately tries to find the pretend Lola, who is repeating many of Alice’s older routines for herself. Her quest leads her to confronts Tinker and Barney in person, separately, but even though they know of the switch, and enjoy the new girl just as much as Alice, they don’t know who she is. Finally, the  story climaxes with Alice pretending to be a mystery fan who challenges the other girl, online, to see who can get the most tips from followers by performing the most outrageous acts. The loser will have to grant whatever the winner asks for.

The best scenes are the online performances, where we can see how each part of Alice’s act gets tips and text responses from the followers, and how it affects her ranking against the other camgirls; Alice is obsessed with breaking into the top ten.

A little over an hour and a half, the film still drags at times, especially in the family scenes. The acting is stiff and uncertain, probably because we’re never sure of Alice’s relationship with her mother and brother. But most damaging is something related to one of the film’s strengths. The entire camgirl setup is unclear as to its business model: who owns the site, how are “tips” translated into cash, how are the rankings determined and why do the girls care so much about them. The breathless editing pumps up the excitement, but too often it’s unclear just what is actually happening. It also takes a while to realize that the fake “Lola” is a different girl because Brewer plays both roles, but with a different wig and make-up. I read that Mazzei first thought of making it as a documentary. I’m sure it would have been clearer, but just as certainly duller.

Also, the ending is abrupt and dramatically unsatisfying. But, to be fair, it was prepared for. When interacting with real people, Alice is either slightly bored or, when searching for her doppelgänger, under tremendous strain. The only time we actually see her enjoying herself, to the point of ecstasy, is when performing in front of her laptop screen.