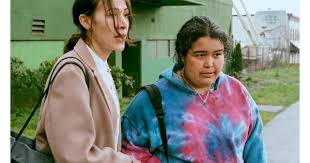 A Canadian prize-winner from 2019, “The Body Remembers when the World Broke Open”, was co-directed and written by Elle-Maija Tailfeathers and Kathleen Hepburn (the film’s title comes from an essay by Billy-Ray Belcourt). It is one of the latest adventures into the single shot derby, in which, except for the pre-credit sequence of about fifteen minutes, the entire story is told from a single unbroken perspective lasting an hour and a half. Unlike other attempts – I’m thinking especially of “Birdman” – the technique is justified by a serious purpose. On balance, the viewer is rewarded for the effort. But certain flaws in the technique are also revealed.

In Vancouver, we first see Rosie, played by Violet Nelson, a working-class indigenous woman, who is pregnant, going home from work. She lives in an apartment in run-down public housing, with her boyfriend and his mother. We hear the boyfriend’s angry screams, but never see him. The film then cuts to Aila, played by Elle-Maija Tailfeathers, the co-writer-director. She is being examined for an IUD by a gynecologist, a man. She tells him she had an abortion eight years before, and has sex regularly with her boyfriend. The doctor advises her that, if she wants to get pregnant, it is a good time. Aila, a middle-class indigenous woman, is carefully groomed, attractive and articulate, if a little withdrawn.

Then comes the brief credit sequence. The rest of the film, lasting an hour and a half, is in one seemingly unbroken shot, but which was actually filmed in sequences with a succession of cameras. Aila approaches Rosie on the street when she sees her standing in the rain, barefoot, with a large facial bruise. Rosie responds to Aila’s questions guardedly, but she is clearly frightened of her boyfriend, who can be heard screaming offscreen, and agrees to go back to Aila’s apartment with her. She sits quietly in a chair, for the most part, standing only to go to the bathroom, or to sit at a table drinking tea. When unobserved, she steals Aila’s wallet, and some pills from the bathroom cabinet. Their conversation in that long scene is halting, evasive, filled with silences. Rosie slowly reveals that her boyfriend had beaten her, which he does regularly, which alarms Aila, who expresses concern for the unborn child. She convinces the reluctant Rosie to go to a safe house that she knows, where she can stay and be protected.

On the cab ride to the safe house, Rosie injects some unexpected humor, telling the driver that Aila is her half-sister, and that she goes to rehab for a drinking problem; Aila just smiles silently. Then Rosie suddenly asks to stop at a “friend’s place” for a minute, but Aila secretly follows her. Watching from behind a wall, Aila sees Rosie buying drugs, but she returns to the cab first, and says nothing. When Aila finds that she can’t pay the cab driver because her wallet is missing, Rosie hands it back to her. At the safe house, Aila and three female counselors talk with Rosie, and try to convince her to stay. There is much discussion about the danger of harm coming to the unborn child. Rosie, however, is confused about what she wants to do. To help her decide, the two women take another cab ride together.

At the end of the film, Aila tells Rosie that she’ll make a good mother, and Rosie says that Aila will too.

The film has been well-received by critics who have found it gripping, and transfixing. I think this is a little misleading, however. The film succeeds in making both women credible, and in maintaining suspense. The performances have the rhythm of real life, as befits the story. This is primarily how two women, strangers, team up in an effort to solve a critical problem for one of them. And it ends, most convincingly, with uncertainty about the future.

One minor, but still annoying problem, however, is that the single shot technique puts a strain on the audience when there are long periods where two characters are just talking to each other in a confined space. Even with my need of a hearing device, much of the dialogue was unclear, especially from Rosie, who often said only one or two words. My wife, who has no hearing problem, felt the same way. This was made worse because the camera kept moving back and forth to each speaker, which meant that we miss any cue from the listener’s face that could help us understand what was said.

Still, the decision to use the single shot technique is justified, in this case, because it conveys the sense of unrelieved helplessness that a woman feels when another woman insists on doing things that does harm to herself, and perhaps her unborn child. The feeling is frustration, Aila’s, and now ours. But, having said that, I still feel that Tailfeather had a more rewarding experience in making the film that way, than I felt in seeing the film that way.

A different, and more important problem is the ending. In one sense, it is satisfying, as was the whole film, in its modest way. The filmmakers have successfully forced us to see how Rosie could allow herself to accept a violent and cruel relationship, and yet be reluctant to terminate it. However, the story is not quite resolved in a different way, although I’ll grant that Tailfeather did this intentionally.

Specifically, I rather quickly accepted the apparent direction of the story with regard to Rosie, and this was fine. She seemed so withdrawn and protective of her willfullness, no matter the pain it caused her, that I assumed there would be no dramatic transformation of her character. And the single shot technique reinforced this. It not only created a unity of theme, but of narrative development as well. The single shot viewpoint, in real time, locked Rosie into a situation where another woman, a total stranger, as were three other women she met later, were all intent on her making a critical decision that could affect the rest of her life. It would have been entirely appropriate, then, for the film to end – by fading out on that single shot – at the very moment that Rosie is alone again, to face the consequences of her decision, whatever that was.

Ah, but it doesn’t. After Rosie leaves the cab, and the film, we stay with Aila on her ride home. In the last five minutes, she is alone with her thoughts. But they are never expressed to us.

This is where I think the film let me down. The suspense in the story was always less about Rosie than about Aila. We first meet her in the doctor’s office, getting fitted for an IUD. We learn that she had an abortion eight years before, but that she now has regular sexual intercourse. Thus, from the beginning, the issue of whether Aila should have a child becomes the most important part of her story for us, and this is especially true when we see how protective she is of Rosie’s unborn child.

That is why I felt let down when we leave Aila in the state of doubt that she’s in at the end of the film. Rosie’s polite parting words that she’ll make a good mother too aren’t enough to answer the question. In her interviews, Tailfeather says the entire film was inspired by her meeting with a girl like Rosie some years before; it was that significant for her. Enough for her to have an entire re-enactment made, in which she actually plays herself.

But significant how, and why? From my perspective, its significance would depend on whether it led to a decision about having a child herself. I searched the internet on that, but I still don’t know.

But Tailfeather would be the first to remind me that my “perspective” is limited; that the film was meant primarily for indigenous women, who would be able to understand the almost paralyzing pressure they have to withstand in a racist society that wishes to ignore them, at best. For them, the “story” is that this is what they have to ask themselves, every day, before making that decision. That the anger they feel at having to ask it at all is the only convincing “ending” for them, which is satisfying enough in narrative terms. If I want a better one, she might say, let society evolve into it.