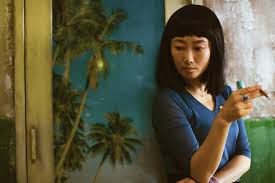 Any new film by Chinese master Jia Zhangke is likely to be different from anything he’s done before, and often, from any film you’ve ever seen before. He doesn’t tell his stories in a straight line, and this one made me turn away from the screen several times to ask myself, “What just happened?”

This causes problems for distributors. In this case, the marketing campaign seems to push it as a Chinese gangster film. But that’s not only wrong, it’s ridiculous. 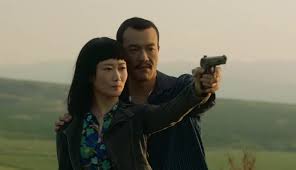 It begins in 2001 in Datong, a rural mining district. Zhao Tao plays Qiao, the daughter of a factory worker. Qiao helps her well-liked boyfriend, Bin, in some shady activities in the town, making him a self-styled gang leader. They are a popular couple, but Qiao stays mostly in the background. When Bin shows her his gun, she insists that she carry it for him because they are illegal in China. One day, however, when they are standing in a deserted area near a volcano, she lets him teach her how to use it.

Of course, the day comes when she has to. She is riding in a car with Bin, when a rival gang forces it to stop; they start to attack Bin brutally. Qiao takes out the gun, dispersing his attackers as soon as they see it. But the police then arrest them both. Qiao gets the longer sentence because she refuses to say where she got the gun.

She is released after five years. She is disturbed because Bin never once visited her, and she sets out to find him. This second section of the film deals with her search, and her disappointment that Bin avoids her. Now penniless, she fashions various ploys to raise cash, mostly from gullible men. The tone of this section is slyer, more satiric; it has some welcome laughs. Finally, she succeeds in getting Bin to meet her face-to-face. In a lengthy and painful reunion in a hotel room, in which he confesses his guilt over abandoning her, he terminates the relationship.

At this point, Qiao feels only bitterness towards all men. She boards a train, but with no particular destination in mind. When she meets an odd, but interesting and sincere man on the train, she agrees to travel with him. However, she leaves him sleeping in his seat, and sets out alone again. Still, the man’s sincerity has the effect of softening her bitterness.

Qiao decides to return to her village. Her family is gone, but the members of the old gang welcome her, and she finds work in the same cafe where Bin used to hold court. Then, one day, Bin returns, but in a state that shocks all who knew him before. He is in a wheelchair, the results of a stroke. This last section of the film focuses on the relationship of the former lovers. Qiao is devoted to restoring his health, and grudgingly, Bin seems to place himself under her control. 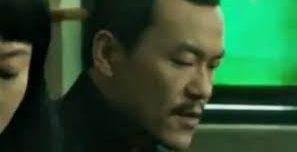 Qiao’s generosity and devotion become the main focus of the final portion of the film, and it is truly affecting. Zhangke celebrates this quality, its hopefulness. Late in the story, Qiao takes Bin back to where they had shared moments of happiness, by the volcano. But we are reminded of what Qiao had told Bin then: that the ash must be so pure because it was created under such intense heat.

The film’s final moment – a lightening bolt of pure sadness – affixes Zhangke’s by now familiar perspective: that we can never be prepared for the kind of cruelty that awaits us in life. While a shock, it  provides a satisfying completeness to what might have seemed a tale as meandering as an Alice Munro story, although just as exhilarating. 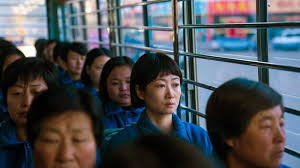 A people in transition foto:filmlinc.org

From the above summary, it is impossible to know that the film is not just the story of star-crossed lovers but a despairing look at the plight of the Chinese people today. The film has countless references to displacement, to the loss of community caused by economic upheaval. Factories are constantly being relocated, leaving workers stranded in non-urban regions without jobs. We see multitudes of Chinese traveling to new locations, by boat, by train, but with no certainty of an independent life any more. Some survive by petty thievery; Qiao is robbed by a woman on a boat. But, mostly, their faces show resignation and helplessness.

But, despairing as it is, the presentation is muted. The Chinese people seem to retain the comforts of religion and family traditions that make them far more accepting of such crises, and Zhangke strikes a tone that is sympathetic to that aspect of their character. On the other hand, as an American, I couldn’t help thinking that the public reaction to such conditions in this country is likely to be more openly hostile.

Zhangke’s mastery is such that he is able to integrate this theme with Qiao’s tragic story with unstrained control. But part of that confidence is based on his collaboration with Zhao Tao. Her face is one of the most recognizable, and iconic, in Asian film today. It is able to express volumes, and part of the pleasure of the film is in having so much of the story told by our watching it. But Zhao Tao’s greatest talent may be that she inspires Zhangke to make wonderful films like this.