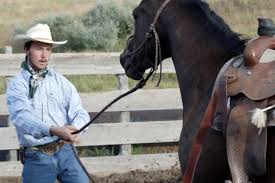 Brady Jandreau in “The Rider” foto:wtop.com

Sometimes it’s better to know as little as possible about a film before seeing it. All I knew about Chloe Zhou’s “The Rider” was that it was her second film, and had already won a number of festival prizes. I found it a strong story, confidently told, but there was something about it that was distracting and, at first, I didn’t know what it was.

Filmed on the Pine Ridge Indian Reservation in South Dakota, it is an absorbing story of a young rodeo rider, severely injured in competition, who has to adjust to the fact that that he can never ride again. It casts a harsh light on how the rodeo culture of extreme physical tests of masculinity are a kind of trap, with almost impossible standards. But Zhou also emphasizes that its appeal to young men rests on a feeling of freedom, a communion with nature and, above all, the love of horses.

Zhou only came by this story circumstantially, by her chance meeting with Brady Jandreau while making her first film. They became friends, but then he was seriously injured in rodeo. The story of how Brady adjusted to his new life strongly affected Zhou, and she resolved to get the funding to film it. It was a risky decision to use only non-actors, most of whom would be re-enacting real events from their own lives, but the gamble certainly paid off.

The story is deceptively simple. Although still young, Brady Blackburn is well-known as an accomplished rider; specifically, of the bucking bronco. Even after his best friend, Lane Scott, a bull rider, has been turned into a mute paraplegic from rodeo, his zeal to compete is undimmed. The film opens with Brady examining his own injuries, which left him with a metal plate in his head. While recuperating, he spends time at home with his mentally challenged younger sister, Lilly, and his father, Tim, a struggling rancher, who calls him crazy to want to compete again.

The film graphically depicts the challenges facing Brady, including the encouragement of his friends to return to rodeo. Hesitant at first, he tries horse training, but is injured again from simply riding. His doctor sternly advises him never to ride again. Disheartened and confused, he takes a supermarket job for lower pay. The family struggles without his rodeo income, and may even lose the ranch. The tensions with his father only increase. Finally, Brady is forced to make a fateful decision. The final scene is dramatically satisfying because it convincingly resolves Brady’s conflict with his father, which had become the dominant theme of the story.

Zhou shows an impressive ability to obtain natural, unaffected performances from these non-actors. In fact, it may be more accurate to call them “performers” instead of non-actors. Brady, Lilly and Tim Jandreau are all “performing” themselves as a family, with a different surname. We can see the difference immediately: there is a freshness and intimacy in their scenes with each other that is remarkable. Zhou apparently decided to use the same technique for the other characters as well. She assembled the cast from local people she already knew, and put many of their own reminiscences in the script. Except for a few minor roles, all of the actors in the cast go by their real names.

This technique, however, presents challenges to the viewer as well as the filmmaker. I didn’t even know at first that the cast was non-professional. I can’t tell you the exact moment I realized this, but there was no doubt about it. At that point, I was forced to think about whether a particular scene was part of the “story” that Zhou wanted to tell, or was a re-enactment of something that had happened to the actors. This was especially distracting in the scenes with Brady and Lane Scott, his best friend. Scott is shown as mute and paralyzed; even more disabled than the late Christopher Reeve from his accident. The scenes with the two of them in the hospital are uncommonly moving. But was Lane “preforming” them? Did he read the script, or have it explained to him? Was he directed where to look, when to smile? I couldn’t say.

I’ve read interviews with Zhou, and I’m still not sure. The scenes with Brady and his autistic sister are intimate and relaxed, as if the camera is following them in their own home. But Zhou insists it is a “fiction” film, and that the actors were only told what would be happening in each shot, and of what to say in general terms. She also said that her script was largely based on previous events that Brady, Tim and some of the others had told her about.

That made me think of another film. I remember criticizing “Man on Wire”, the film about Phillippe Petit’s high wire walk on the World Trade Center, because, while it presented itself as a documentary, it also staged re-enactments of earlier events, often using actors. Here, all the actors are the same people that the story is about, and yet Zhou maintains that it is a fiction film and not a documentary.

What is it then? An acting school exercise, where the teacher pieces together a script from the real lives of the actors? I’m not saying that you can’t make a work of art that way, but there’s no way these questions will not disrupt your enjoyment of the story. In fact, this very review can be considered a “spoiler” for just that reason.

Finally, the film is not a breakthrough for this technique. It goes back at least to the silent era. In “Nanook of the North”, Robert Flaherty filmed an Inuit family, but pretty much told them how to pose and what faces he wanted them to make for the story he wanted to tell. He used basically the same technique for “Man of Aran”, an unforgettable classic. I don’t remember being as distracted by its use for that film, though. I think I’ll have to see it again.