French filmmaker Michael Hazanavicius, the Oscar winner for “The Artist”, presents another comic fable about a film genius in “Godard Mon Amour”. But this one is a real person, in fact, a living legend. Granted, this is a highly specialized entertainment, but for a cineaste like myself, most of it was very enjoyable. 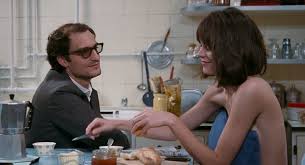 Jean Luc Godard was at the top of the cinema world in 1967, the year he made “La Chinoise“. The leader of the nouvelle vague, with masterpieces that had already changed cinema, there seemed no limit to his career. He had cast a beautiful nineteen year-old girl, Anne Wiazemsky, in “La Chinoise“, and they fell in love. This film is the story of their doomed relationship after she moves in with him.

In a way, their love story is a triangle, with an outsider splitting them up. In this case, the third party is the student revolt, which started in May, 1968. “May ’68” is a turning point for France, a ghost that refuses to fade from the zeitgeist. And the fact that Anne was the same age as most of the members of the movement, while Godard was 37, only inflamed his insecurities.

We rarely see such an unflattering portrait of a living person, much less a renowned filmmaker, by another filmmaker. The film’s poster boldly quotes Godard as saying that the film is a “stupid idea”. Well, it’s not. It is funny, entertaining and, from a psychological perspective. rather insightful. The nouvelle vague was an explicit rejection of a conservative, tradition-bound culture. Godard’s genius was to keep the touch light, showing the actors treating serious subjects like sex, crime and politics in an irreverent and playful manner. But, beneath the lightness, the message was best conveyed by the title of an early masterpiece: “Contempt”. He was declaring himself to be the unofficial leader of this new culture, and he was still young enough to be the idol of the movement, who were mostly college students.

But by 1967, with youth challenging a conservative leadership derived from colonialism, the fun part of their defiance was being replaced by something else: pure rage. Godard was unprepared for this, and his anxiety about how “La Chinoise” would be received is the springboard for the story. We are even meant to question whether he really loved Anne, or was merely using her for his career. Played by Stacy Martin, she is glowingly beautiful, youthfully stylish, and always on his arm for countless press interviews. As always, the public Godard is witty, scornful and provocative, but he keeps glancing nervously at his beautiful, and always silent,  petite amie – and later wife – as if expecting to find hidden flaws in her devotion. But the press is not nearly as frightening as the students themselves, who openly challenge his political commitment. He is much more halting and unsure with them; he holds onto Anne as if she were a shield.

For at least two thirds off the film, Hazanavicius’ perspective is well-focused, and we watch gleefully as Godard – being Godard – can’t help but make things worse for himself. With the students especially, his defense of cinema as a serious political weapon only fuels their outrage. And he can’t drop his new persona even with friends. Now, every word they utter can be interpreted as a betrayal of the movement. Anne, who feels no pressure to be political herself, simply ignores his tirades at first, but is soon sympathetic when his friends distance themselves.

Much of the filming wittily references Godard’s style: title cards, shock cuts, garishly unnaturalistic acting, exhaustingly choreographed tracking shots. As photographed by Guillaume Schiffman, the mise-en-scene packs rich color into every frame,  recalling the great Raoul Coutard, his most celebrated cinematographer. The famous street riots of ’68 are stylishly filmed as a dance, a group tango in fact, of cops with batons and bloodied kids. Godard and Anne seem to walk into them unexpectedly, with Godard often bruised and shaken. A running joke in the film is how many pairs of his (trademark) eyeglasses are broken.

The funniest scene has the couple and four friends packed into a compact car on their return to Paris. Godard, Truffaut and some others had protested the Cannes Film Festival as “politically irrelevant”, causing its cancellation. Scrambling for a ride back, the group of five, all darlings of the film business, get an unlucky conventional bourgeois to drive them home. While Anne shrinks into her seat in embarrassment, Godard shrieks invectives at his “reactionary” friends, all of whom clearly regret ever meeting him.

Some of the fizz is lost in the last half hour; nothing much new happens, and his pathetic squirming gets a little tiresome. Once Anne is offered a role in a Marco Ferreri film – where she will do nude scenes – it’s a foregone conclusion that she will defy Godard’s demand to turn it down; she’s already looking to a future without him.

What gives the film its bounce and bite is Louis Garrel, as Godard. In glasses and sports jacket, he is the essence of cineaste nerd. And yet, as laughable as he becomes, there is a poignancy to his humiliation. He’s still in a state of shock over his international success. Probably his biggest shock is the beautiful girl who fell in love with him. This is what makes his downward spiral – at least at that period in his life – such a compelling spectacle.

While part of the fun is catching inside references to Godard’s films, it also recalls the work of another famous filmmaker: Woody Allen. It presents this odd, mismatched couple within a love letter to a beautiful city – here Paris instead of New York –  and much of the humor stems from the strain of two very different people discovering just how different they really are. Until they come to the same conclusion that so many of Allen’s couples reached: “Life goes on”.

Of course to some, the entire film is a total falsification of Godard. Even at his worst, he was never such a buffoon. But, from the perspective of pure entertainment, it doesn’t matter. The film isn’t a biopic, but a pure fantasy. It’s meant to be taken as fun only, like an extended SNL skit. Hazanavicius and Garrel have created a Godard who is the fictional star of a Godard movie, as flip and guileless as Belmondo’s car thief, and just as determined, surely unconsciously, to destroy himself.