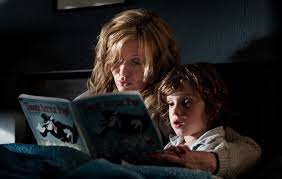 Having gotten those out of the way, let me say that they are the only times I felt this invigorating film threw in the overused clichés of this genre. Australian Writer-director Jennifer Kent has a sure sense of pacing and camera movement, and has gotten terrific performances from Essie Davis and Noah Wiseman, as a widow and her six-year old son living a domestic nightmare.

Amelia is a widow whose husband was killed in a crash when driving her to the hospital to give birth to their son. The boy, Samuel, is highly intelligent, but suffers horrible nightmares. He become obsessed with defending himself and his mother against monsters invading the home. Amelia is constantly called to his school because he frightens the other children. But the situation becomes even more critical when she reads him a children’s story about Mr Babadook, a top-hatted ghoul who promises to kill whoever reads about him. The book itself seems to be haunted, and miraculously reappears even after she burns it.

I don’t have to tell you that Mr. Babadook will appear as a genuine presence of horror film proportions, and that a goodly number of shrieks will escape you before the battle between good and evil is over. But who actually wins that battle? I found the ending fully satisfying, but I can see why some may be disappointed. I think, after seeing this film and the underrated Triangle, that Australian and British horror tend to favor demons that are of psychological, as opposed to purely supernatural, origin, which may explain why those films end ambiguously. But whether the scare givers are Aliens (Dark Skies) or ghosts (Mama), American taste runs more to simpler explanations, resulting in evil that is comfortably external. Which is why, of course, we know that when they are dead, they will never, but NEVER, come back (wait for laughter).

I just want to mention that Essie Davis – because she is so good in this – runs the risk of becoming a horror queen, which may limit her career choices. I wish her many good roles, but richer ones too.