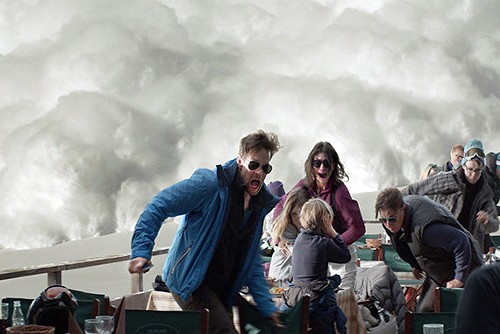 A prosperous Swedish family – husband, wife, young daughter and son – are on a 5-day vacation at a French ski resort. They are having lunch at an outdoor cafe when they hear a rumbling, and see a wall of snow slowly descending the mountain. It is awesome, and the husband, Tomas (Johannes Kuhnke), films it with his smartphone. But it grows larger, and is soon a roaring wave that threatens to drown them all. Tomas quickly grabs the phone and runs, leaving wife and children behind him. Fortunately, there was no avalanche – it died at a safe distance – but the husband’s cowardly act cracks a fault line in the marriage, and is the basis of this slyly comic, but unsettling film, the fourth feature by Swedish director Ruben Ostlund.

Ebba, the wife (Lisa Loven Kongsli), hides her resentment at first, but soon advances it, relentlessly. She uses it to humiliate him with another couple, and then does it again at dinner with his friend Mats, who is divorced and vacationing with Fanni, a girl half his age. At first Tomas denies it, saying Ebba “misperceived” what happened. Mats, uncomfortably, tries to defend him. Then, in an excruciating scene, Ebba slam-dunks it by playing the video that Tomas shot on his phone. The image of both couples peering down into a tiny screen is one of the funniest in the film.

Ebba’s victory proves hollow, however. Tomas sinks rapidly into self-pitying, and the children are terrified that the family will break up. Without recourse, Ebba resolves to save the marriage. Finally, on the last day’s ski run, the crisis is resolved in a harrowing scene.

This is the first of Ostlund’s films that I’ve seen. While the story does grip, the characters are off-putting, to say the least. The contest of wills is played out icily, without passion. There is no violence or screaming; sobbing only prevails. The spectacular winter scenery seems to trivialize the discomforts of these pathetic humans, as I think was Ostlund’s intent. He’s been likened to some of the masters – Bunuel and Michael Haneke in particular – and this is not invalid. But Bunuel, even when skewering the upper classes in late works like The Discreet Charm of the bourgeoisie, kept it comically surreal, making the movie more fun, if less disturbing. Haneke is closer, but Ostlund can’t begin to match the brilliance of his dialogue or skill with actors.

But his skill in undeniable. What appears to be a flying saucer hovering over the night snowscape is revealed as a children’s toy. Also memorable is the tableau of the children and Ebba, in despair, covering a weeping and prostrate Tomas with their own bodies. And yet, you are always reminded that the characters may only be demonstrating emotions to each other, without true feeling, much as the actors who are playing them.

I admit that I was absorbed, but also confused by the film. Does Ostlund’s contempt for his characters extend to us, the viewers? Does he delight in manipulating us, but have no moral center? If true, and he’s just a smug bully, he’s not doing it for our lunch money. He just wants to tease, point and laugh. But he gets a pass – this once – because he is clever and original. Just be wary.