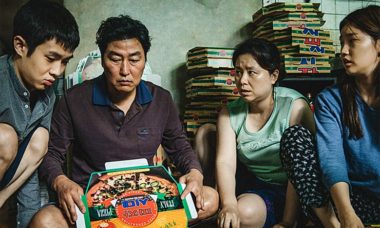 The latest film of South-Korean filmmaker Bong Joon-Ho, “Parasite”, is a razor-sharp satire about class warfare in modern society. It concerns the Kim family, which  consist of the father, Mr. Kim (Song Kong-he), his wife, their young adult son and younger teenage daughter. We get to know them and, despite committing fraud and causing innocent people to lose their jobs, they hold onto our sympathy throughout.

This is largely due to how Bong  sets up the story. We meet the Kims as a warm, tightly knit family who are struggling to survive in desperate poverty. Their street-level hovel is cramped, and they can barely afford to live there. They have to chase after a roving wifi, which finally settles near the toilet. Most importantly, they maintain their spirits even though Korean society has pretty much deprived them of much of a chance. The daughter, Ki (played by Park So-dam), is skilled with the computer, but has little chance for a real job. The son, Woo (Choi Woo-shik), can’t seem to get into a university. He seems bright enough, but is dispirited and rather aimless. Instead, the four of them scrounge for the odd job that lets them work at home, like folding pizza boxes for which they get a minimal sum.

This changes when a friend of Woo makes him an offer. The friend, Min (Park Seo-joon),is going away to the university, but wants Woo to take over as English tutor for his pupil, a beautiful but shy girl from a wealthy family, the Parks. The girl, Hye (Jung Ji-so), is a year younger, and won’t go to university until the next year. Min hopes to marry the girl one day, so he chooses Ki to replace him because he’s not going to school, has no future, and would not be a threat to steal her from him like some “drunken frat boy”.

Park Ding-ik (Lee Sun-Kyun), and his wife, Yeon (Cho Yeo-jeong), are a high-profile, wealthy couple, due to Ding’s incredible business success. After Yeon witnesses Ki’s forceful yet sensitive first tutoring session with Hye, which she insisted on seeing for herself, Ki is welcomed eagerly as Min’s replacement. Immediately, Kim senses a goldmine. One by one, the rest of the Kim family get positions in the household: Ki becomes an art therapist for the eight-year old son, Song (Jung Hyun-jeon), a brilliant but troubled boy; Kim replaces the regular chauffeur after Ki concocts a story that the man is a sex pervert; finally, Kim’s wife, Chun (Jang Hye-jin), becomes housekeeper after Kim plants evidence to support his false claim that Moon (Lee Jung-eun), the regular housekeeper – who was originally hired because she had worked for the architect who designed the house – has incurable TB.

Now a word about that house. It is spectacular, and thrillingly used by Bong as a set. That’s because it is a set, designed with Bong by production designer Lee Ha Jun to serve not only as the main playing area for the story, but as metaphor for a society where the wealthy isolate themselves from any interaction with the poor. The wide screen emphasizes the sleek modernist style, the hugeness of the rooms with ultra-wide windows to let in maximum sunlight. The living room has an IMAX-sized window that overlooks the sculpted sunlit garden. The impression is of a spare, rigid functionality. But – as we are constantly reminded – it is a functionality that is very, very expensive.

The complicated story is laid out with rare clarity; you always know what’s going on throughout its two and a quarter hour playing time. The crisis point comes about halfway, when all of the Kims are seated, drinking the family’s whiskey in the otherwise empty house. The Parks had left, leaving Chun in charge, to go on a camping trip because it was Song’s birthday. Thinking the four new employees don’t know each other, they assumed Chun would be in the house alone. But, suddenly, a visitor comes in the pouring rain. It is Moon, who wants to talk to Chun alone. Song, who still texts with Moon, had told her about the camping trip. Moon knew it was the only time she could tell Chun her secret: that she has been using the house, without the Parks knowing, for many years. She knows that she won’t be able to continue unless she gets Chun’s cooperation. 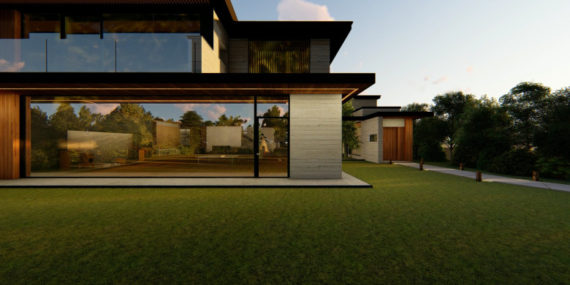 The secret is a genuine shocker, but Moon thinks that Chun will allow her the continued use of the house because she is a “nice person”. However, once Moon finds out that the Kims are a family, and had conspired to get her fired, she seizes the opportunity: she blackmails the Kims with a picture of all of them together, which she took on her iPhone, and which she will send to the Parks unless they allow her continued access to the house.

What happens next should not be a surprise: the Parks call Chun because the camping trip was a washout, and they’ll be home in a few minutes. It’s just another of Bong’s sly winks to the audience: when did a character ever leave a movie to go on a “camping trip” and not come home unexpectedly?!

The second half plays out the consequences of this turn of events, and this changes the tone of the film. The blithe, lightly cynical style, recalling Billy Wilder, becomes frantic and nerve-wracking. But it prepares us for the shocking violence to come.

Then, after the Parks return, Bong takes us to a breathtaking sequence that had me shaking my head; how did he ever do it? All of the Kims, except Chun, have to sneak out undetected to return home during the storm. But this is no ordinary movie storm, but an awesome drenching of biblical destruction. The Kims’ entire neighborhood is under water. The stranded families have to float on their upended furniture to a stadium where it seems thousands of them have to sleep on the playing floor.

Bong  saves his most damning view of class inequality for the aftermath of the storm. Astonishingly, the Parks’ home is virtually untouched. After the extensively detailed images of suffering in the poor neighborhood, the brilliant sunshine seems almost a by-product of the Park family’s wealth. Yeon calls all of the Kims on their cell phones to invite them to her sumptuous garden luncheon, to make up for Song’s washed out camping trip. But, tragically, it is an uninvited guest who will have the greatest effect on the lives of the host family, as well as on the Kims.

Whether the shocking climax is a form of justice is something Bong leaves up to the viewer. But it seems clear to me that he thinks it is, and that the audience will join him, in spite of the film’s rueful coda. In retrospect, the story is resolved with an act of pure rage, and it could n0t have been any other way.

This film is a rare delight, even with its disturbing overtones. The only flaw in the story is the “lucky rock” that Min gives to the Kims as a bribe; it becomes a clumsy, overused symbol. But, aside from the film’s overall excellence, “Parasite” may turn out to be significant in another way. This is a young person’s film. Young, smart movie lovers will relate to its themes as universal. The same story could have been set in any developed country where the opportunities for most of them have virtually dried up. It will be an international blockbuster because of that, and Bong’s screenplay clearly shows it was intended to be. There may be no more than fifteen seconds in the entire film where you’re even aware that it takes place in South Korea (I’m not kidding; see if you can find the spots). In fact, you could take an American cast playing the same characters, speaking almost the exact same dialogue, set it in the crapholes of Baltimore and a posh suburb of Virginia, with absolutely no loss of impact. You don’t need an American remake.

For that reason, I hope the film gets as wide a distribution as possible, even with subtitles. Young movie lovers always have an initial resistance to subtitles until they see that special film that converts them. I think Bong Joon Ho’s “Parasite” will be the film to do that.