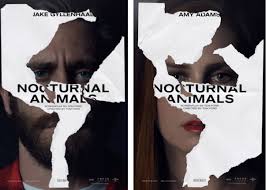 I saw this one on TV, over two days, so it feels right for my review to be shorter, less analytical. I liked the film, and it’s worth your time.

Fashion designer Tom Ford wrote and directed it, which helps explain why it looks so great. But the casting, acting, and editing are just as smooth. It’s the story, however, and the way Ford chose to tell it, that’s really interesting.

Susan, played by Amy Adams, is director of a high-profile art gallery and unhappily married to her second husband. Her first, played by Jake Gyllenhaal, sends her the manuscript of his first novel, titled “Nocturnal Animals”, which he has dedicated to her. They have not met for almost twenty years. She reads the manuscript, which becomes in essence a separate film within the first.

That film stars Gyllenhaal as a man driving through the Texas desert with his wife, played by Adams, and their teenage daughter. A car carrying three men pulls up alongside. The men, abusive and loutish, run them off the road, seemingly as a joke. But we soon see that it is much more than that. The terror and suspense build, unbearably, because it is so totally without reason. They get Gyllenhaal to leave the car, and two of the men drive off with the women. The other man takes Gyllenhaal to a deserted location, and drives off. Eventually, Gyllenhaal reaches the authorities. He teams with the sheriff, played by Michael Shannon, in the search for his wife and daughter and their kidnappers.

I think Ford has used this story within a story in a very original way. It is of the popular “terror” genre (think “The Last House on the Left”), but no less gripping because of it. But it is Susan, even while reading the manuscript, who remains the central character of the film. The Texas story is interrupted several times to let us see the effect it has on her; from an initial unease that gradually grows into horror and despair. There seems to be some hidden reason for it, something that will only become clear by the end of the film. The film we are watching, that is, not the novel with the same title.

It is finally revealed in a very brief flashback (you’ve got to pay attention). It’s the kind of revelation that makes you reflect on the entire film, from the beginning, to see if there were any “clues” that could have given the secret away. After one viewing, I don’t think so.

The revelation is credible, and satisfactorily resolves the narrative. Still, I can’t help thinking of it as something of a gimmick. What do you think?