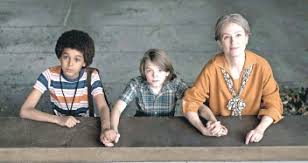 Todd Haynes’ new film, “Wonderstruck”, was the closing night selection at the New York Film Festival. I didn’t see it there, but I’ve read that it was well-received, as it was at Cannes this year. Haynes is one of our most original and imaginative filmmakers. This story, adapted by Brian Selznick from his novel of the same name, is mostly concerned with childhood. It clearly had a special appeal for Haynes, and, as always, he wasn’t afraid of taking risks to express his personal vision.

It concerns Ben, played by Oakes Fegley, a ten year old boy living in Minnesota in 1977. Ben has no memory of his father, and his mother, who is a librarian, is reluctant to talk about him. After she is killed in a car accident, he goes to live with his mother’s sister and her family. But he is excited after finding a book among his mother’s things. It is about the Museum of Natural History in New York, and it has a note inside from a book store, Kincaid Books, that might be a clue about his father. One night, while he is on the telephone during a storm, lightening strikes the house, and the electric charge sends Ben to the hospital. When he awakens, he discovers that he is totally deaf. Feeling more isolated than ever, Ben decides to run away to New York to find his father. He will start the search at Kincaid Books.

Up until that point, Ben’s story, which is in technicolor, is intercut with another story that is filmed in black and white and is silent, except for music and isolated sound effects. It is about another child, Rose, played by Millicent Simmonds, who is living in Hoboken, New Jersey in 1927. For nearly the first hour of the film, the two stories unfold with seemingly no relation to each other. Rose is deaf, and is treated harshly by her family, who disapprove of her fascination with movie stars. She is especially drawn to one silent film star, Lillian Mayhew, who will soon star in a Broadway play. Rose runs away on a ferry to New York. She is intent on seeing the first performance, and of meeting the famous actress in person.

Soon after Rose successfully completes her mission, however, the film abandons her story, and the black-and-white filming. After Ben arrives in New York, the story focuses on his search for his father, the solution of which will also satisfyingly explain his connection to Rose.

This second half of the film introduces the third child, Jamie, who is black and about twelve years old. As played by Jaden Michael, he is a fascinating anomaly. Street-smart, yet wise and life-smart too, he is the perfect ally for a deaf, homeless ten-year old boy in the phantasmagoric Big Apple of the ’70s. In fact, the dazzling, scrupulous recreation of New York street life at that time is the film’s most impressive achievement. Jamie’s father works in the Museum of Natural History, which is where most of the rest of the film takes place. Jamie is able to provide vital clues about Ben’s father, who had some mysterious connection to the museum. This leads Ben to take a bus to Queens, where he will meet an elderly woman who will provide the answers to his questions.

As photographed by Haynes regular Ed  Lachman, the film is a visual feast, with interesting contrasts between rural Minnesota and a bustling, cacophonous New York City. The editing is rapid, but never confusing. Also, the sound design is amazing, as it keeps shifting from full volume and clarity to the lesser perspective of Ben and Rose, whose deafness is suggested in muffled tones. The score, from another Haynes regular, Carter Burwell, is one of his most accomplished. Both percussive and lyrical, it is almost continuous in a nearly two hour film. The complex set-up of two seemingly unrelated stories makes demands on our attention, which the music helps to sustain.

But that complexity reveals a weakness in the film, which is far too long. Rose’s connection to Ben, while vital to the story, is straightforward. Nothing that happens in the silent film sequences really adds to the overall impact. If only one shorter flashback was used, instead of so many intercut sequences, it would have made less demand of the viewer.

There is also a real imbalance in the story once we get to New York. Jamie is a very complex character, and his behavior is often confusing. His attachment to the younger Ben is partly explained by guilt at not noticing Ben’s deafness at first, and of teasing him cruelly. But the way he just takes charge of Ben’s mission, and discovers clues about his father’s life, is somewhat implausible. Sure, a brilliant twelve-year old ghetto kid is not unusual, but does he need to be Hercule Poirrot? Also, Oakes Fegley’s performance as Ben is often unsure, especially when expressing anger when he finds that Jamie withheld a vital piece of information. Conversely, Julianne Moore continues to amaze; as the elderly Rose, she is perfect and nearly unrecognizable.

Finally, the theme of deafness itself feels unintegrated with the rest of the story. The search for a parent, and one’s own identity, is a universal theme. While we may be more sympathetic when the seeker is, as here, a disabled child, it also introduces an element of clinical scrutiny; a distancing effect.

It seems that nearly every new film from Todd Haynes is called a “departure” for him. “Wonderstruck” is certainly that insofar as it holds to an uncharacteristically optimistic view of human nature, and that it is concerned with childhood. The three main roles are all played by child actors. The heartbeat of the story is a boy’s search for his father, always a compelling theme. However, while the completed film feels like the film he must have wanted to make, the strain shows, and the optimistic perspective is a little forced. It just doesn’t soar, and this kind of story – one that depends so much on the freshness and innocence of childhood – must take our spirits there, or it disappoints. Still, Haynes retains his integrity; the story is resolved convincingly, with little sentimentality. For a change, Haynes wishes to show us that a better world is possible if only we rely on our natural instincts for generosity and trust. Those of us who can share that optimism are the most likely to enjoy this film.