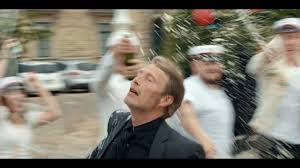 “Another Round” is a winner, but be warned, this Danish import has many sharp edges that are meant to prick while it makes you laugh. It was directed and co-written (with Tobias Lindholm) by Thomas Vinterberg, and has received numerous festival awards.

The main character is Martin, a high school history teacher in his early 40s. As played, brilliantly, by Mads Mikkelsen, he bores his students, is cold to his wife and rather distant from his two sons. The film rather quickly shows a link to what may be a drinking problem. He attends a private birthday celebration for Nikolaj, a philosophy teacher, played by Magnus Millang, and two other friends. During dinner, he is somewhat sheepish about why his career has stalled, after what seemed a brilliant future. They are concerned about him, and hint they know about his drinking. And yet, a disturbing note is struck by their intense enjoyment of alcohol, which Martin participates in willingly. The four colleagues – including Peter, the choir director, played by Lars Ranthe, and Tommy, the soccer coach, played by Thomas Bo Larsen, walk home at dawn, laughing and drinking all the while. 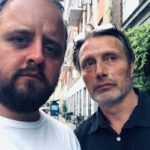 That celebration establishes the tone for the rest of the film. The men love to drink, especially with each other, but have accepted the fact that it’s going to cause problems in their lives. Martin, and two others, are devoted family men, and the fourth, still a bachelor, is struggling to find his own life-mate.

Then, a dramatic theme is struck when Nikolaj tells the group about a Norwegian scientist who believes that humans are born with a blood alcohol deficiency of 0.05%. The scientist theorizes that many social problems can be solved by having people drink constantly to correct the imbalance. Nikolaj thinks this a grand idea, and the group starts a research project where they will keep a record of daily intake, restricting it to working hours only.

The effect is immediate and – preposterously! – a total win-win for all of them. Now fully involved, Martin’s teaching starts to excite his students again. He takes the family on a camping trip, where he has sex with his wife for the first time in months. And Tommy really pumps up the soccer team, even getting a timid boy called “Specs” to finally score a goal. The drink breaks are successfully kept secret, and all four of the men feel at their peak.

Obviously, the story has to take a dark turn from there, and Vinterberg makes it as ugly as we might imagine. A kind of plateau is reached when Martin’s son finds him passed out in the street, and staggers home with him. Still, even after public shaming, the men continue with the research. Family life starts to suffer again, and Martin tries to resist, but it’s no use. Nikolaj comes up with a monster sazerac cocktail for them – a blowout of pure happiness! –  which results in disaster for the group. Martin is kicked out of the house, and another member commits suicide. End of story.

Or is it? Yes, Martin is estranged from his wife, but there are strong hints they’ll reconcile. While the friend’s funeral is a sad affair, the three men, still in their pall-bearer suits, go to a tavern to drink “in his memory”. The tone shifts quickly again when buses of students, joyfully celebrating their graduation, start to party in the streets. The last ten minutes of the film are a panoply of music, dancing and, most of all, beer, beer, beer. The capper is Mikkelsen’s amazingly acrobatic dance to the joy of life, probably the most exciting musical climax since the end-credits of “Slumlord Millionaire”. 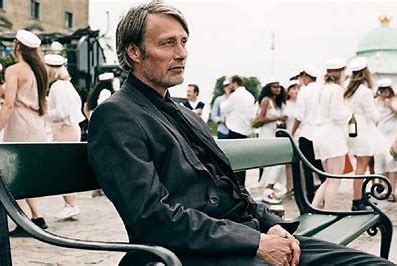 If you are as confused by Vinterberg’s message as I was, that seems to be what he wanted. True to his Dogma 95 roots, any judgment of human fallibility is beside the point. He wanted to nudge viewers to remember every doom-driven alcoholism movie they ever saw, and then to out-guess them about where this one ends up. But is that modernist irony, or just a cop-out?

My vote is…I don’t care. While a bit repetitive, the intensity of performances, surprising twists and nimbleness of tone make for an exhilarating show. And Mikkelsen is the perfect choice to express Vinterberg’s vision. His face in repose is creviced and glacier-like, with lasers for eyes. But when it registers emotion, whether of pleasure or deep pain, it is spellbinding, and even, in its way, gorgeous.