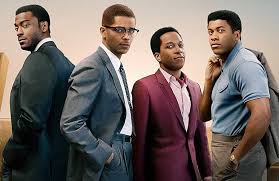 My initial skepticism about this film is understandable. “One Night in Miami” purports to be an imagining of the reputed post-fight meeting of four black cultural icons after Cassius Clay’s 1964 defeat of Sonny Liston. Four actors portray them:  Eli Goree is Cassius Clay, Kingsley Ben-Adir is Malcolm X, Leslie Odom, Jr. is Sam Cooke and Aldis Hodge is Jim Brown. They have gathered in celebration of the victory in Malcolm’s Miami motel room, with Elijah’s guards posted outside. The film is based on Kemp Powers’ play of the same title; it was adapted by him, and was directed by Regina King.

The challenge is formidable. This is recent history, with four major cultural figures who have left us countless memories of themselves, both from live appearances and mass media. How could it be anything but a dull, probably offensive pageant?

Well, be prepared. It turns out to be a triumph.

The dramatic thrust of the story comes from Malcolm, and this seems historically right. The other three were ready to party, but Malcolm, a solid family man, had ulterior goals that were his only reasons to be there. He was uncomfortable about fitting in with these loose-living younger guys, and had a pretext – he “left” his camera in the car – to get away so he could call his family from a booth.

Malcolm was driven by both desperation and ambition. He knew a break with Elijah Muhammed was unavoidable, and would remove his only source of income; his plans needed a hurry-up. So it became time to use his fame and public support to start his own movement. He had prepped Clay for Islam conversion and now, once he became title champion, it was time to make it happen for real. Before an idolizing public.

But once inside that hotel room, the story diverges. While Cassius Clay was an opportunity, Malcolm had genuine respect for Sam Cooke’s achievements. Cooke had deliberately used his success as a model for his race. He had put real money and time into gaining influence, not just profits, so that his music represented something more than just entertainment. But this enraged Malcolm. He saw Cooke as a sellout to white musical taste, which would never tolerate a black man as a serious artist in white culture. He wants Cooke to be ashamed of this. Tellingly, when he wants to demonstrate what true revolution means, he doesn’t put on one of Dr. King’s speeches, he puts on Dylan singing “Blowin’ in the Wind”.

Inevitably, our interest is both enriched, and challenged, by what we know about the future of these four men. However, the dramatic meat of the story, with the most intellectual and emotional resonance, is the conflict between Malcolm X and Sam Cooke. And, also inevitably, its tragic undertone is amplified by the fact that, within less than a year after this night, both men would be shot dead in separate incidents. 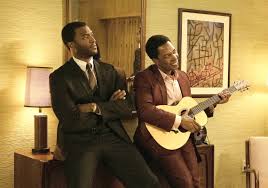 First, Regina King. The day before I saw this film, I was channel-surfing and caught an intense scene from “A Face in the Crowd”, with Patricia Neal and Andy Griffith. In just a few moments, you could already see how Elia Kazan had revolutionized screen acting. There was not a moment when we didn’t see the actors listening and responding to each other. This made the story so much closer, more intimate, and with technique that was invisible. American filmmaking soon benefited from this change, especially with directors trained in television, like Lumet and Frankenheimer, and studio masters like Robert Wise. My point is that this film is crafted with those values in mind. Close-ups are rare and brief. The action is always with the actors, sharing that space together, letting life just happen. King also knows just when to “go big”, then to pull away. This is not only excellence, but traditional excellence.

But these strengths are in the screenplay too. While it was a play first, this is not a filmed play, like “Ma Rainey’s Black Bottom”, slow as sludge. Four separate vignette’s introduce each of the main characters, with Brown’s the most lacerating. Then we see the title fight, with the other three cheering Clay on, and Malcolm taking pictures. Once at the hotel, periodic breaks outside are inserted judiciously: a parking lot phone booth, a liquor store, a flashback to Cooke’s concert in Boston. And, recurrently, shots of Elijah’s two guards posted by the door.

But this never stops momentum for the main story involving the interaction of these four men. No need for newsreels of cops with clubs, orations in front of crowds. It was assumed we all knew American culture in 1964. The n-word is used once, by a white man. But the four leads all call each other “negro”, a term with a built-in wink.

You couldn’t ask for a more cinematic screenplay, adapted from the stage. And, with delicious irony, it was written by the playwright himself.

The cast is fully up to the task, down to the minor roles that Powers introduced for the film. In the only major woman’s role, Jacqueline Kalukango is sympathetic as Malcolm’s wife. As Cooke’s wife, smoky-sweet Nicolette Robinson also scores in her one scene. Lance Reddick evokes Woody Strode, silently fearsome, as Elijah’s bodyguard. And Jeremy Pope provides a thrilling thirty seconds as Jackie Wilson onstage. Completing the four major characters, Aldis Hodge, as Jim Brown, and Eli Goree, as Clay, are well-nigh perfect. 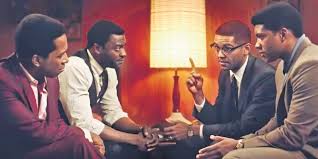 Malcolm instructs on the movement foto:newindiaexpress.com

But the central character is Malcolm, and Ben-Adir’s first scene made me apprehensive. He seems timid when confronted with his wife’s frustration over his reluctance to challenge Elijah. Jacqueline Kalukango skillfully balances her criticism with the requisite respect of a Muslim wife for a husband’s authority. We see later, however, that what seemed timidity was only a deep devotion to family. When focused on winning Clay’s support, and confronting Cooke’s almost mocking cynicism, Ben-Adir transforms into a dominating advocate for black power. Dramatically, Odom presents a biting and canny opponent in Cooke. His pride wounded, he confronts Malcolm on a personal level, with damaging efficiency.

Still, if there’s any one of this iconic group who seems to have been shortchanged, it’s Ali. While Eli Goree’s performance is fully realized, and spectacular, it was modeled on a simplistic view of its subject. At 22, Clay is callow and over-confident, and this comes across clearly. But this view fails to prefigure what we came to know about the man, starting with his conviction for draft evasion just two years later. As his success grew, Ali openly took more of a leadership role in the black struggle, and this became him naturally. But there seems very little of that in the film.  His ideas on racism seem shallow and very personal, bound up to his ego. His anger at discovering Malcolm’s manipulation is like a betrayal of their friendship, but only that. Unlike Sam Cooke, he is never shown to view his success as an advance for black people. He seems oddly distant from the rage between Malcolm and Cooke, and is confused by why they seem willing to destroy their friendship because of it. Granted, Ali usually preferred to show his defiance when in the spotlight, not as part of any group protest. But in his own indirect way, he inspired many black people to join the struggle. I just couldn’t buy such a simplistic view of him, even at age 22. While so much of what Powers asks us to imagine about that night seems real, and illuminating, the fullness of Muhammed Ali seems to escape him.