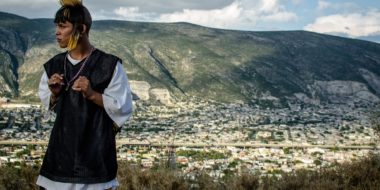 One of 15 short-listed films for this year’s foreign Oscar, Mexico’s “I’m No Longer Here” shows some  originality. First published as a short story in 2013, writer-director Fernando Frias casts a harsh light on the poverty that shapes the lives of so many young Mexicans today, letting the story lead the audience to its own judgment. This is better than having a character speechify a moral position. Parenthetically, I was pleased to learn that the HBO show Frias directs, “Los Espooky’s”, will be returning for a second season.

But this film is very different in tone. It opens with seventeen year old Ulises. played by Juan Daniel Garcia Trevino, being sent to America by his family, bypassing legal immigration, because he’s become a target of a gang in Mexico. We see him accept an MP3 player from his tearful sister, then being driven over the border by smugglers. Homesick and disoriented in Queens, New York, and speaking no English, he can find no steady work, and struggles to survive.

The next third of the film flashes back to his home city in Monterrey, leading up to his departure. Ulises leads a group of aimless kids, not really a gang, who love to dance the cumbia, an indigenous Colombian music style. Called the “Turkos”, his gang is one of five that informally divide Monterrey into territories. But we can see from the get-go that it hardly a gang at all; the other four operate as murderous drug-dealing thugs, while Turkos just love to dance. Oddly, the Turkos are treated warmly by the other gangs, who are mostly amused by them, even protectful. But this changes when members of one gang are killed in a drive-by shooting by another gang, and Ulises is suspected of setting it up. His mother knows, immediately, that he is marked for death in Monterrey, which explains his departure in the first scene of the film.

The film also gives a fresh view of an immigrant’s ordeal in America, mostly by relying on Ulises’s face to tell the story, since he cannot speak English. That face registers intelligence, confusion, pride, fear and internal despair, but little in the way of pleasure. Vanity also plays a role. Ulises knows he is beautiful, and draws further attention with outlandish hair and colorful clothes, which are baggy, in the cumbia style. He also knows he is the best cumbia dancer, especially when he can make the music run slower on his MP3.

His only relationship in America is with Lin, a pretty Chinese girl who works in her grandfather’s store. Angelina Chen is appealing in the role. They meet when Ulises comes to the store with other laborers looking for work, without luck, but the two have a quick look at each other, which hints at more later on. Sure enough, they have a chance encounter again, when Ulises is hard up. She is intrigued by his “style”,and secretly lets him sleep on the roof of the store. But the relationship goes no further. Ulises internalizes his feelings of shame and homesickness, which alienates Lin. Back on the streets, he takes to glue-sniffing, leading to jail and deportation back to Mexico.

The final section of the film is inconclusive, and a little disappointing. We can see that Monterrey is as dangerous as ever, with even more open attacks on the police by the gangs. Ulises tries to link up with his old friends, but they are scattered. Whether certain death awaits him or not, he is in a sad place.

The music in the film is constant. It is strange, often pulsating, but sombre too, like Ulises. We are shown someone with a very fearful relationship with the outside world, not good for becoming an “American”. We see a helpful girl try to reach him, but she fails. To Frias, it may be because she’s too late.