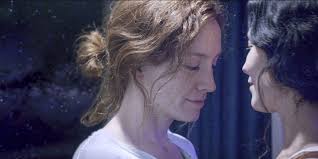 Aniara, an ambitious science fiction film from Sweden, takes enormous risks by imagining the end of the world – in fact of human civilization – from a realistic perspective. Written and directed by Pella Kagerman and Hugo Lilja, it was inspired by an epic poem by Nobel Laureate Harry Martinson, which was later turned into an opera. It imagines the relocation of human survivors to Mars after life on earth becomes unliveable. But even this grim prognosis is thwarted by faulty science. The filmmakers surely knew that we wouldn’t come out of the theatre whistling. More likely trembling. Unless, that is, they could also leave us with some hope, some element of the human spirit, no matter how slight and unreliable, that would make us feel that such a life would be worth living anyway. My verdict is, yes, they succeeded, but barely.

“Aniara” is the name of the spaceship that is taking thousands of people to Mars, where they will join those who made the trip before them. It is supposed to be a three-week trip. Even so, leaving earth behind is going to be traumatic, so a mind-enveloping system, Mima, has been devised to provide comfort. The system’s manager, Mimaroben, is sad to leave earth behind, but she believes that hope for the future is more important, and can be maintained through the vicarious experience of life’s pleasures. She has programmed Mima to provide various multi-sensual “memories” of earth that can flow directly into the brain, to the extent of making one unable to feel one’s own body. People remove their shoes and enter a vast room, where they lie on the floor. Mimaroben supervises the entire experience, and helps those who have problems.

Mimaroben has already been on several such trips, and this one seems just as uneventful. But, suddenly, the ship collides with space debris, which effectively knocks out its nuclear fuel system. The ship is pulled off course, and cannot be redirected until it falls within the gravity system of a celestial body. The Captain, Chefone, announces that the delay may take up to two years.

Not surprisingly, Mima is met by huge numbers of distraught passengers seeking its distractions. Mimaroben barely gets a moment’s rest, but has hope that things will soon get calmer. Little does she realize, however, that this is only the first of many tests of her extraordinary capacity for optimism.

This, then, is what we are told will be the future of the human race. The theme is developed slowly, without overblown melodrama, and in rather convincing detail. We become familiar with various sections of the huge set: the crowded corridors with their shops, the Captain’s control room, Mimaroben’s personal space, cell-like, which she shares with an astronomer, and, most vividly, the arena-sized room where people are put under Mima’s trance.

The actors and streams of extras are moved about the set with professional fluidity. Soon, a credible picture of such a society is established. The majority of the people, whether passengers or crew, are comfortably average members of the consumerist state. Before the collision, they mindlessly play with their children, eat fast food in restaurants and like to shop. Aniara resembles nothing so much as a huge mall. But while the Captain and a few crew members know the truth about the collision – that there is little chance of ever regaining control of the ship – the passengers are curiously passive about the ever-increasing delays. Even when food in the restaurants run out, and the only thing left to eat is a horrible tasting liquid algae, they accept the nonsensical explanations they are given: it is just a temporary setback. 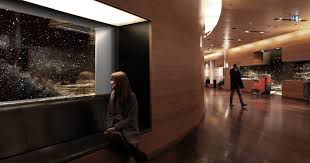 This kind of story would seem ripe for satire, the kind of thing Swift and H.G. Wells did so memorably. But the opportunity is rather wasted. There are numerous scenes of grumbling extras, but very few of the passengers establish any kind of personality. A single moment sticks in the memory: after the first delay, a woman complains that she had promised her son she would join him on Mars for his fourth birthday. But after that, none of that luckless crowd did anything that sticks in the mind. Instead of Swift, we get a rather middling Orwell.

The story rests, instead, on Mimaroben and the members of the crew she interacts with. This was a wise decision. It was less unpleasant to witness her seemingly unique talent to find beauty in life than to be benumbed with the details of our inevitable doom.

While some may think that the story is not so pessimistic – because survivors can continue the human race on Mars – the film tells us otherwise. The overall tone is one of hopelessness, especially since the story avoids any confirmation of there actually being survivors on Mars. The only conclusion is that it is just another lie that our leaders tell us.

That pretty much kills any suspense for a “last minute rescue”. For better or worse, Mimaroben’s life becomes the story. As a result, without her character, as sympathetically affirmed in Emelie Jonsson’s sensitive performance, the film may just be unwatchable. No other character is able to gain our sympathy. The Captain, a realist who hides the truth in order to maintain order, is a standard autocrat. Mimaroben’s roommate is her emotional opposite. A science-oriented pessimist, she feels nothing is better than the truth, no matter how frightening. While her integrity is admirable, she is at base just a cold person.

The true story, simply put, is how Mimaroben struggles to find a meaningful, loving relationship with someone. And she is confused about what she wants at first. She has a quick fling with a stud crew member, which is unsatisfying. Feigning a job intervention, she cuts it short midway, telling her partner to “finish himself off”. Then, over time, she finds herself falling in love with a woman pilot, Isagel,  who is very distant at first. Their intimate lesbian relationship soon becomes the most important part of Mimaroben’s life. As for Isagel, played by Bianca Cruzeiro, we see only a dull, passive creature, in spite of a rather odd, and unconvincing, moment of rebellion.

Mimaroben even becomes more challenging of authority as her emotional life is nourished. After Mima self-destructs from having to service the ever-growing numbers of panicked passengers – in a scene wittily reminiscent of Kubrick’s Hal – Mimaroben build’s a copy of Mima, a virtual screen showing earth’s beauty that can be viewed from inside the ship. The Captain denies permission at first. But, as depression grows among the passengers, he relents, and eventually rewards her with a medal for building it, many years later.

Even though sympathetic, Mimaroben doesn’t connect with us easily. In fact, Jonsson seems an odd choice for the role of such an exuberant, life-affirming personality. She seems to carry a baseline sullenness that could have been chilling. Someone like Bjork would have been ideal. But she slowly builds warmth into the role. When, late in the film, Mimaroben has to confront the most tragic personal loss of her life, Jonsson triumphs. Her grief is shocking and truly heartbreaking.

And yet, as horrible as it is, that grief defines what the filmmakers want us to take away from this story. They obviously feel that only those of us capable of feeling the deepest pain are able to experience the joys that life has to offer. It’s a trade-off, in other words. Unfortunately, that rather stale insight fails to overcome our depression at witnessing the end of all human existence.