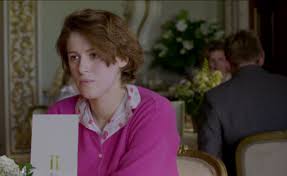 Joanna Hogg has directed and written an openly autobiographical film, “The Souvenir”, about her early career as a filmmaker. One reason it has received a lot of attention is because it stars Honor Swinton Byrne, who is Tilda Swinton’s daughter. One of Hogg’s first short films starred Swinton, who plays her daughter’s mother in this film. But the film has other things to offer, even if it leaves a rather peculiar aftertaste.

But first off, I noticed that one favorable review – by Anthony Lane in the New Yorker – warned the reader not to know too much about the film before seeing it. I’m still not sure why he felt that way, but I’ll come back to that later. 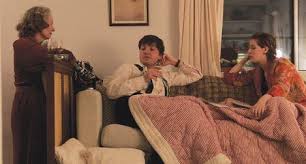 The film concerns Julie, a girl in her young twenties from a privileged background in England. She is determined to become a filmmaker, and wants to make films about the things in life that she was protected from ever knowing about because of class privilege. She chooses as her first subject a northern industrial port city, Sunderland, a scene of much labor unrest. When she applies to film school, the committee is a little confused because they wonder what personal experience she can bring to the project. Also, as she tells them in the interview, she brings no fixed political point of view, such as outrage over treatment of the workers, but just wants to convey an honest, unbiased picture of the situation.

She is then delicately advised to look for a subject that is closer to her own experience.

We learn this about Julie in the first few minutes of the film. This becomes more important as the film goes on because the subject she eventually does choose is her love affair with a man, Anthony, who is several years older. Since this film – made thirty years later – is mostly about her relationship with him, it becomes, in a sense, the film she could have made had she taken their advice at that time.

It didn’t take me long, however, to see that this story was going to slide comfortably into the genre devoted to many similar stories about vulnerable, sheltered young women abused by older, sophisticated men. Lane’s “spoiler-alert” seems almost quaint in that context. Anthony, played to devastating effect by Tom Burke, is ‘bad news” personified,  and in neon. Though in his early thirties, he seems world-weary, and casually confident about his life style and goals. Claiming to work for the “foreign office”, he casually chats up Julie as if he just wants a gallery buddy whose cultured background shows the kind of “appreciation” of the finer things she’ll be able to share with him. He takes her to see a small Fragonard of a girl carving her lover’s initials on a tree. He tilts his head. He squints. So, so intimate. We can almost hear her heartbeat on the soundtrack.

Then, in a delicious scene, she lets him share her bed, chastely, and is altogether giggly when he complains that she gave him too little room.

Already we’re prepared for the worst, which is, of course, the expected pattern for this kind of story. Hogg has mastered the tone for that. The soundtrack is early eighties Brit cool, The Pretenders, Joe Jackson, as well as dropped party chat about “the Stones”. As the relationship deepens, Anthony’s passion for opera is sliced into the soundtrack, none too subtly, to show his ever-increasing domination of her. They have “fun” together, but the scenes are always cut on the edge, hinting at the blade that is still mostly hidden.

Slowly, the revelations drop in lumps, and Julie’s worst suspicions are confirmed. No, it doesn’t matter what they are; it’s the narrative getting filled in that gives satisfaction. Even without any real surprises. Hogg skillfully moves the able cast about with enough style to keep us involved. Byrne is a good choice for this, with an expressive, youthfully eager face that draws on our sympathy; she is in every scene. She is still a bit tentative and stiff, but experience should bring out some boldness. It did with Carey Mulligan, who started out in the somewhat similar, An Education. Interestingly, Swinton is uncharacteristically bland as Julie’s mother. Was she, perhaps, unwilling to upstage her child? 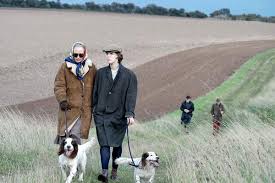 The question of whether Hogg waited too long to tell her story also plagued me, especially because of what I most enjoyed about it. Hogg’s eye for beauty is impressive, to say the least, and was immensely aided by the magnificent photography by David Raedeker. They found a visual baseline of darkly muted warmth that, at times, made me want to jump into the screen. One shot in particular – of Julie, Anthony and her parents walking into the vast, green gardens of their estate, with two white dogs cavorting in the distance – was breathtaking. That richness of tone infused every shot, from city storefronts, posh restaurants to the heavily clouded skies of Britain. The dialogue scenes were intricately staged, with interiors often given a split-screen effect; again, the emphasis was on edge and rhythmic movement.

In contrast, however, the story advanced stodgily. Maybe it wasn’t strong enough on its own, but the sophistication of the filming made it seem weaker. For instance, late in the film, there’s a powerful scene of heroin withdrawal – and it is really frightening – and yet, after the shock wore off, I found myself appreciating the artfully randomized blood stains on Anthony’s white shirt. In other words, I had been trained to love the look of what I was seeing, making the emotional content somewhat remote. Was this Hogg’s intention? And did it reflect Hogg’s own emotional distance from those events?

I’m not just being pesky about these things. This is the story she’s telling us. It is impossible to ignore the fact that at the same time that Julie is searching for a subject to film, she falls into a relationship that becomes the subject of one of her films. The thirty years delay is beside the point. Of course I’m making the self-serving assumption here that we’re seeing a “true” story that has been fictionalized, that the relationship between Julie and Anthony was a real part of the filmmaker’s life. This is the “fun” part for the audience, and Hogg lets us enjoy it. Julie and Joanna Hogg are meant to be the same person.

But by accepting this, any view of Julie as a naive and manipulated victim is belied by that very fact. It is clear that Julie/Joanna had to be aware that this developing relationship just might turn into something important to her, as an artist, while she was actually living the experience. She had taken on the role of “observer” of her own life, and even of her emotions, because of its possible future value as an artistic subject. With that in mind, why should we avoid the conclusion that both lovers went into the relationship to use the other person for their own ends. And, on the basis of this visually stunning but emotionally and morally stunted film, she got the better of the deal.