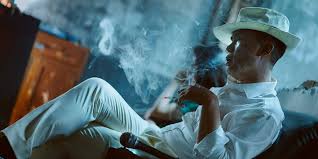 Bi Gan’s “Long Day’s Journey Into Night”, a peculiar but intermittently enjoyable Chinese film, has no connection to the Eugene O’Neill play other than the title.

Bi Gan gave a brief introduction to the film because he realized, correctly I think, that the audience was likely to be frustrated because the “mystery” that the film’s hero was trying to solve would never be solved. This was because most of the film was really his dream, and dreams really have no solution.

The film is in two sections. In the first part, Luo Hong Wu, played by Huang Jue, is waking up from a dream. He tells his girlfriend that he isn’t sure what it meant. The next precipitating event is the funeral of his father. Returning to the village he grew up in, for the first time in years, he is drawn unwillingly into memories of the past which he may have repressed. He finds a photograph of a woman he had known, Wan Qiwen, and becomes obsessed with finding her again. He also finds a gun, and thinks it may have some connection with the murder of his childhood friend, Wildcat. His quest for answers doesn’t seem to have any logical sequence, unlike a traditional film noir, where clues are meant to have real significance. Flashbacks are presented as memories, or are they dreams; we’re never sure. We see Wan in flashback, played by the stunning Tang Wei, as a kind of gangster’s moll who has an affair with Luo. But then, back in the present, Luo meets a woman in a green dress named Kaizhen, also played by Tang Wei, and starts to follow her. If it’s really Wan, why don’t they recognize each other? 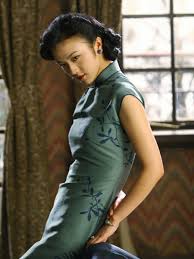 Nothing particularly memorable happens in the first part, although the sequence in the Karoake bar, where a man is suspended from the ceiling and tortured while Luo sings in a Panama hat, is weirdly funny.

The second part of the film, more than 50 minutes long, is an actual dream that Luo has when he falls asleep in a movie theater. As Luo does, we wear 3D glasses while watching this sequence. The film ends when the dream does, and, as Bin warned us, it doesn’t provide the kind of answers that satisfactorily resolve traditional stories.

The second sequence does have a kind of plot: Luo wakes up and wanders from the movie theater into a kind of cave. Hopelessly lost, he meets a teenage boy and asks for help. The boy says he’ll show him the way out if he beats him in ping-pong, which Luo does. Luo sits behind the boy on his motorbike, then is taken to a carnival of sorts, where he meets a young woman – is it Kaizhen? – who is supposed to be singing with Wan that night. Wan is not there, and Luo decides to stay close to this woman as a way to find her. He follows her backstage while she is waiting for her turn to sing. Eventually, Luo becomes obsessed with her too, and they find themselves falling in love.

What holds us in this ridiculous scenario is how Gan sustains a mood of mystery that seems, while we are watching it, similar to what we feel when we are dreaming. It all takes place on one enormous cave-like set with endless pathways that lead to various enclosures where Luo meets the other characters. Another trick suggesting the dream-state is to have the same actors we have seen in Luo’s real-life story portray different characters that he seems to be meeting for the first time. We know this often happens in our own dreams. Wildcat’s mother – a throwaway role played by Sylvia Chang, a major Asian star – becomes a red-haired woman who pursues a man she says had harmed her in some way.

A lot of the critical reaction to the film was hostile. In fact, some of the most negative was from critics who really liked Gan’s first film, Kailis Blues, which I haven’t seen. They thought the story was weak and the visuals were not as vivid as in the earlier film.

I can’t defend the story, such as there is one. The acting is only adequate – despite the presence of popular Asian stars – but mostly because they had no clearly defined characters to play, and little in the way of dramatic conflict that demanded intense emotion.

But what worked for me is the kind of involvement from the audience that the film required. It was more like a poem of the internal life of a person than a dramatic story. I was reminded of an essay I read as an undergraduate, “How Does A Poem Mean”. Gan was challenging himself to see how film can most be like real life experience. He used 3D to approximate the mysterious, seemingly absurd shifts in time, people and environment that we experience in dreams, and that excited me. The depth of field added by the 3D was meant to give us a sense of movement in space, especially when we have so few clues as to exactly where we are. While this was a somewhat novel feeling, for a time, tedium sets in when there is little in the way of story to make us anticipate what happens next.