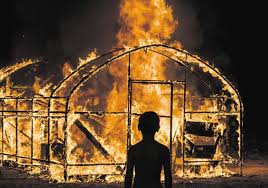 Lee Chong-dong’s brilliant film, Burning, from South Korea, is an international prize-winner. It is sure to be a strong contender for best foreign Oscar. It’s a genre film, in a way, the genre being stories based on William Faulkner’s famous line: “The past isn’t dead yet. It isn’t even past.”(from “Requiem for A Nun”). The line has been used (or, as some say, misused) so many times that there’s no real consensus about what it really means. Along with Lee Joon-dong, Chang-dong based the screenplay, loosely, on Haruki Murakami’s story, “Barn Burning”. I doubt, however, that many who actually read the story – as I did – will think that Chang-dong wanted to make a faithful adaptation. Instead, the film is a forthright expression of Chang-dong’s belief that past events continue to influence us, often unconsciously, long after they occur; a theme that is not to be found in the story. Murakami has his own theme, a very different one, which will be discussed later. But, for Chang-dong, the Faulkner quote is very apt for the film’s significance. In fact, the film’s protagonist, Lee Jong-su (hereinafter Lee), played by Yoo Ah-in, a struggling writer living in Seoul, says that Faulkner is his favorite author. 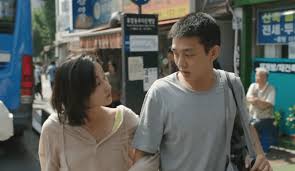 We first see Lee working on the street as a day laborer to support himself while writing. He stops to watch two pretty models who are selling raffles. One of them sells him a ticket. When he wins a prize – a woman’s watch! – the model says she recognizes him from childhood. She is Hae-mi, played by Jeon Jong-seo, who lived nearby; they even went to grade school together. Hae-mi is aggressively friendly, seductive in fact. We also see that Lee is shy and withdrawn, but also, being a writer, quietly curious. Hae-mi soon seduces him, although Lee is not unwilling. 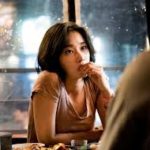 Their relationship deepens. Hae-mi is studying mime, which she demonstrates. She eats an imagined tangerine, which Lee watches in delight. Hae-mi tells Lee a vivid childhood memory. When she was seven, she fell into an abandoned well near her house. She is terrified until she is rescued; she will never forget it.

But the relationship is soon interrupted. Hae-mi is going to visit North Africa; she’s always wanted to go. She asks Lee to feed her cat while she’s away. The cat is a stray she named Boil because she found it in a boiler room. But, even though Lee sees that Boil eats his feed, and uses the litter box, the cat never appears.

Meanwhile, Lee moves into the family home, a small farm, which is now empty because his father has been arrested for assaulting an official. Lee’s mother had left the family long ago, due to her husband’s violence, and Lee hasn’t seen her for many years. His sister left years before when she married.

Three months after she left, Hae-mi calls Lee to pick her up at the airport. But she is with a companion, Ben, played by Steven Yeun, whom she met in Algiers. Ben is about Lee’s age, good looking and well-off, although his business is rather mysterious. He takes calls, but never seems to go to an office. It isn’t clear to Lee whether he is Hae-mi’s lover, but she now only treats Lee as a friend, cooling things between them. 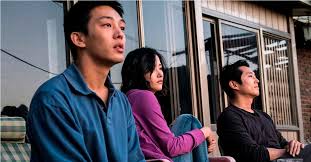 Even so, the three of them often go out together. One day, the couple visit Lee at the farm. They smoke marijuana and Hae-mi passes out, but not until after she has performed a sensuous, topless dance before the two men, both amusing and astonishing them. Then, while they are both still high, Ben confides in Lee. It is the most significant scene in the film. He tells Lee that he sets fire to abandoned greenhouses, and is, in fact, planning another that is close to Lee’s farm. He has no reason to do it; it’s just fun. It’s easy, and he’s never caught. The greenhouses are abandoned, so no one is ever hurt; the police never even bother to investigate. 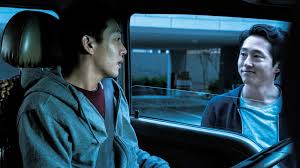 Lee, shocked at first, is also confused. Why is Ben telling him this? He knows it is criminal arson, but he finds it hard to condemn; they are useless structures that nobody will miss. And yet, what starts to obsess him after Hae-mi and Ben leave, is what greenhouse near him will be next. He makes a list from maps of all the nearby ones. He jogs to them every day to see if any are burnt. This obsession eats into him, but even more distressing is that Ben continues to treat him in a casually friendly manner, as if nothing has changed between them.

Lee’s obsession with Ben and the greenhouses blends into his desperation about Hae-mi. The story of her falling into the well especially bothers him. He visits everyone who knew her. Was there a well near her house? Her family denies that there was a well, but Lee’s mother, who mysteriously contacts him after sixteen years, says there was such a well. But she never heard that Hae-mi fell into it.

The tone of the film has markedly changed. Instead of pleasantries between three friends, we witness a man’s near-silent anguish from jealously over Hae-mi and Ben’s confession that he is an arsonist, which seems designed to ensnare Lee as an accomplice. The music, sparse but memorable (by Mowg) increases the tension. The suspense has now become nearly unbearable, due mostly to having the story told, primarily, in Yoo Ah-in’s face. For most of the film, Yoo Ah-in is passive, open-mouthed and a little goofy. Just an unformed, quietly charming young man. But the change in the final half hour is shocking. He is now paralyzed by suspicion, desperately searching for answers. We dread the terrible end to come. And it does.

The tonal transition is smooth, yet disturbing, as from Hitchcock. The master is also invoked in editing that is witty and, often, curiously prophetic. In this, Chang-dong is immensely assisted by cinematographer Hong Kyung-pyo. For instance, when Hae-mi first takes Lee up to her room, she complains that it is always too dark.  She says that the only sunlight, which is brief, is from the reflection from Seoul Tower, which is seen through the window. Later, in mid-coitus with Have-mi, Lee notices that same reflection of sunlight on the wall. Touches like these are strewn like seeds throughout the film, sprouting apprehension.

And yet, also reminding us of Hitchcock, the violent conclusion does not disturb but, rather, leaves us refreshed and satisfied. Not from any perfunctory attempt at Hitchcockian justice, but because Chang-dong’s universe is so casually amoral and arbitrary. The past may be forgotten, but it can return in an innocent guise to destroy us. We can go up in flames as if we are an abandoned greenhouse.

Murakami’s story is very short, and without melodrama. It is told by the writer, who is unnamed, as are the characters based on Hae-mi and Ben. The writer, who is married, meets a young girl, who befriends him innocently. There is no cat. The girl comes back from Africa with a “boyfriend”, and, as in the film, the three of them socialize casually. The boyfriend tells the writer that he burns barns for fun, which arouses the writer’s curiosity. At the end, almost as an afterthought, the writer senses that his youth is gone.

The story is subtly written, and anticlimactic, recalling Raymond Carver, who is an acknowledged influence for Murakami. And yet, despite its brevity, the story stayed with me in a way that the film did not. It sneaks in a bite of mortality. The film, however, treats life as just a game, often cruel, but leaving no bitter aftertaste. Expansive, intricately designed, it provides judgment-free fun in an amoral universe.