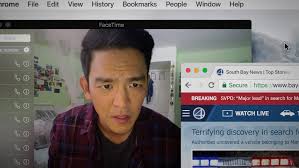 A new suspense film, “Searching”, written by Aneesh Chaganty and Sev Ohanian, and directed by Chaganty, is nothing if not original. You’ve probably never seen anything like it; I know I haven’t. The story – basically a father’s search for his missing teenage daughter – is told in a series of computer screen entries that detail the father’s desperate attempt to locate her after she leaves a study group one night, and disappears without a trace.

The father, David, is played by John Cho, a compelling Korean-American actor. He is an engineer living in San Jose, California with his sixteen year old daughter, Margot, played by Michelle La. In a flowing and richly detailed pre-credit sequence consisting of Facebook entries, we see how a happy, thriving family of three is suddenly struck by tragedy when David’s loving young wife, Pam, is diagnosed with lymphoma, which soon kills her. We see David and Margot in grief in later Facebook entries. But, ignoring Margot’s discomfort, David insists that Margot continue with her piano lessons, which had given Pam so much pleasure.

This last fact is revealed, late in the film, as an important factor in explaining Margot’s disappearance. The middle section, the main part of the film, has David trying to find clues to Margot’s disappearance by breaking into her online activity. Then, after he calls the police, a detective named Rosemary Vick, played by Deborah Messing, joins him in the search. But the search is taking its toll on David, who is becoming more erratic and angry by the day. Rosemary tries to focus him again. She tells him of the problems with her own teenage son, forging an emotional bond between them.

Various teenage friends are suspected, leading nowhere. There is another plot detour that casts doubt on a major character which, while revealing Margot’s hidden emotional problems, is just another dry hole. The search continues, draining both David and Rosemary. At least two other promising, but false, leads are pitched which, like well-aimed curveballs, only tantalize. But then, from out of nowhere, David seizes upon something that casts the entire investigation in a new light. 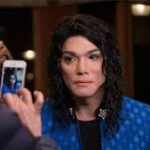 It leads to the capture of the criminal, and a confession, but not the final piece that can end David’s anguish. He has to wait, along with the audience, for that.

Clever and original as it is, there are two problems that interfere with complete enjoyment. The first is that, while the technique of telling a story through online computer entries is an intriguing idea – and has been used successfully for short passages in features, such as Michael Haneke’s “Happy End”, – the technique becomes wearying when used for an entire film. You’re forced to quickly absorb a lot of densely packed data on screens that can disappear in a few seconds, which is how most people tend to use social media. That’s okay for relaxing with your laptop, but can be a strain when trying to piece together a complex narrative.

The other problem is with the story itself. The final confession, while a dramatic surprise that most viewers would not anticipate, left me more than a little unsatisfied. The criminal was revealed to have had a real relationship with Margot that is not adequately explained. Or maybe it just came too fast and was buried too deep in the metadata. Perhaps viewers more comfortable with online navigation would get it all; I’m a lost cause for that. But don’t think the writers didn’t play fair, because they did. In any case, there are spoilers here that are too difficult to navigate through. The film is worth seeing, but be warned: it’s a brain teaser.