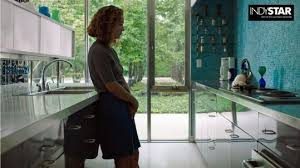 As readers might know by now, I like to “discover” obscure film gems out there, and maybe help them find their audience. I went to see Columbus the day after it opened in New York with just that hope. But –  surprise! – its audience was way ahead of me. I’d never seen a line like that at the IFC house so early in the afternoon, and it was way longer for the next show.

The glowing reviews might be the answer. I doubt that the writer/director – Kogonada – has a following; I’d never heard of him, and this is his first feature. Still, he has a rep for his short films about Hitchcock, Ozu and Richard Linklater, whose Before Sunrise series is an obvious influence for Columbus.

But the Ozu influence predominates. In fact, the IFC showed Kogonada’s brief Ozu homage before the film, including some shots – like a woman weeping with her face in her hands – which were copied in it.

The film opens with the arrival of a world-renowned scholar of architecture, a Korean-American (like Kogonada), invited to the title city (it’s in Indiana, not Ohio) to give a lecture. Suddenly, while exploring one of its famous buildings, he collapses from a stroke. His companion, Eleanor, with whom he has been traveling, rushes to him. Eleanor, played by an unusually subdued Parker Posey, is an American, a devoted disciple, and somewhat younger. She calls his son, Jin, played by John Cho, who immediately flies in from Korea. Jin, a book translator, says he will continue working while attending to his father, who remains in a coma.

But, while Jin’s experiences are pivotal to the film, the main story is about Casey, unforgettably played by Haley Lu Richardson. Casey, barely a year after graduating high school, works at the local library and lives with her emotionally fragile mother, Maria, played by Michelle Forbes.

Casey is bored in her job, but unable to focus on a more rewarding future. She has devised a frustrating routine of being available for her mother, at any time, at even the slightest hint of another breakdown. As a joke, a smitten hanger-on, winningly played by Rory Culkin, asks if he could join Casey and her mother for the evening, which Casey always refuses, laughingly. But we see that the joke is linked to pain for her. 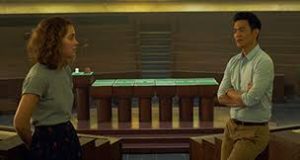 One day, Jin and Casey strike up a casual conversation and start to hang out together, with her showing him the architectural sites. The city is a shrine to the modernists, who are represented by Saarinen, Pei, Roche and others. Jin’s offhand remark that he hates architecture is a shock to Casey who, unlike most of the city residents, can’t begin to satisfy her curiosity about it. She tells Jin, casually, that she was invited to study it in New Haven. Jin is confused by this. He tells her he can’t understand why someone of her superior intelligence wouldn’t have jumped at the chance.

Their relationship deepens, slowly, formally. Jin finds that his walks with Casey soothe his mind, and relieve the stress he feels at his father’s bedside. But he soon discovers how unhappy Casey is, and again implores her to start life afresh in New Haven. He eventually makes her confront the fact that she is afraid of the unfamiliar, and is only using her mother’s illness as an excuse for not leaving.

Although wrenching to Casey, her dilemna is eventually resolved, in a dramatically satisfying way, in scenes of quiet eloquence. But Jin doesn’t fare as well. The film ends with his father clinging to life, while Jin and Eleanor remain adrift in Columbus. Jin resents the fact that he is expected to mourn at his father’s death; and that, even then, his future has no clear direction anyway.

The most important thing to note is that this potentially depressing story never feels that way. Kogonada uses the visits to the architectural sites as an oblique and subtle means of exploring his characters’ emotions. Casey fills in colorful background stories about the buildings which are interesting in themselves. For instance, that Saarinen’s glass-enclosed bank was a revolutionary banking design for its time. We see that Jin and Casey learn about each other’s taste in beauty, and how this advances the intimacy of their relationship. But this is essentially Casey’s story, and what we take from those scenes is mostly about her. A theme – ironic but understated – slowly takes shape: that Casey is never going to really know about the architecture in Columbus until she learns about it in someplace other than Columbus, probably New Haven.

What Kogonada’s technique emphasizes, as did Ozu’s in its way, is that the perspective of the viewer affects how the story is perceived. By placing the camera in the position where the action can be seen most fully, without unnecessary distractions, Kogonada can emphasize the emotional truth of the moment. And Columbus, as a location, helps him immensely. He treats these modern buildings as scenic design; using exteriors as virtual interiors, just as on a set. Each building is fascinating in itself, and, in Elisha Christian’s striking cinematography, almost shockingly beautiful.

I counted one – one! – camera movement. It is when Jin and Casey first meet. He bums a cigarette; they converse, haltingly, and begin to walk together, the camera following them. But that’s it. There are a few sequences of fairly rapid editing, but each shot is from a fixed perspective. All movement, whether from the characters or the environment, is from within the frame.

It’s refreshing to see that a filmmaker is willing to impose a style that demands some work from the audience. You have to get into Kogonada’s rhythms, which are often slow and quiet. But you discover that a story is still being told; be patient, and it gets clearer.

I became absorbed in this process, and it is impressive how confidently Kogonada uses it. There is little in the way of strong dramatic conflict, however, but I didn’t really miss it. The sustained mood of hopeful serenity is a pleasure in itself. Where the film fails to satisfy, however, is in fully resolving its story, especially with regard to Jin. John Cho is so compelling in the role, and makes Jin’s misery so intense, that it didn’t feel right to leave him in that state. Could it be that Kogonada intended that? It almost seems that a sequel is planned, on the order of the Before Sunrise series, bringing the same characters back. Maybe it’ll show the next phase of Jin’s relationship with Casey. It might be called New Haven.