This Argentinian film was Oscar-nominated for Best Foreign Film last year, and I recommend it, with reservations. 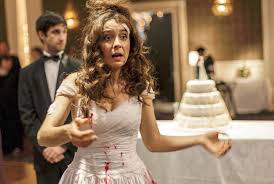 The writer-director, Damian Szifron, has a jaundiced view of humanity, but is inclined to see the humor in how we pathetic creatures relate to each other. Of the six stories he tells, only one, the last, even hints that something else besides meanness and venality reside within the human breast. And even in that story, total disaster is just barely averted.

All of the tales are told from a comfortably successful middle-class perspective. The six stories are, in brief summary: the passengers in a plane discover a disturbing common element in their background; a waitress has dark memories from her past awakened by a customer; two drivers have a road-rage blow-up, like a Laurel and Hardy nightmare; a demolitions expert’s car is towed; a businessman discovers that his son is a hit-and-run driver; and, finally, a wedding celebration is totally demolished in a jealous rage.

While entertaining, I have to say the film falls short of the mark. The writing is clever, subtle and occasionally, brilliant. Szifron structures each tale skillfully, and has a good ear for dialogue, which is not lost in the subtitles. But, as the legend best put it, in comparison to death, which is easy, comedy is hard. And satire is doubly so, because the characters are not going to be particularly likeable. There’s simply no substitute for laughs, and I sat there, squirming, because they didn’t come.

I don’t think it’s the actors’ fault. The performances seemed skillful enough, but, with two exceptions, they weren’t comic performances. All too often we see close-ups of characters who look vaguely distressed, and even angry about their situation, but which seem too mild for the absurd chaos that suddenly confronts them. This was especially hurtful in the hit-and-run story, because it was the sharpest satire. The idea that the law is easily manipulated to let the guilty off, and punish the innocent, is certainly not new. And Szifron’s treatment doesn’t hold back; its as nasty as anything Billy Wilder would have dreamed up. But the acting, both in facial expression and gesture, never threatens to explode into the exaggerated, lashed-out desperation – the wildness, if you will – that pulls out the laughter from us.

Compare this with the performances in the Coen brothers’ Burn After Reading, a film that always makes me laugh. The two films are about the same in terms of the extremity of the situations and the stupidity and desperation of the characters. But Burn wins in laughs because the actors play it “straight”, which, in comedy terms, means they show us the most extreme human behavior in that situation.

This isn’t easy to do. But the Coens knew their clever script wasn’t enough, and they got their talented cast to go all out because farce is funniest when played for total panic; being too “real” is a loser. So even a stupid script, as in Neighbors, can get laughs when its director, Nicholas Stoller, kicks the performances up to that level, and doesn’t lose it by getting too fancy.

But I thought two actresses broke out of the pack because they added enough in terms of expression, or just plain comic shtick, to bring out the fun. Maybe they sensed that the director was just not getting their best stuff so they had to squeeze it in somehow. In the wedding story, Erica Rivas, as the bride, makes her dizzying shifts in mood totally believable, and funnier for it. Also, Rita Cortese, as a cook with a knowing touch with rat poison, is quietly hilarious.

Writer Szifron set a very high bar for his director – himself – but didn’t quite clear it. Based on the film’s reception, I know that’s a minority opinion. But there you have it.