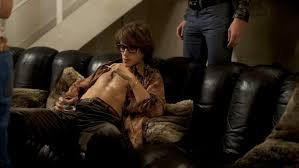 Although overlong, this French biopic of fashion icon Yves Saint Laurent is superior entertainment. I would likely see it again – or rather up to the last third which, while skillfully made, significantly drops off in moviegoing pleasure. But this is partly due to the downturn in the subject’s life due to the cumulative effects of wild partying, sex and drugs finally catching up with him. Interestingly, another film of his life (which I have not seen) was released in the same year. It had the cooperation of the salon and of Saint Laurent’s lover and lifetime companion, Pierre Berge, which this film did not, but it was not as popular as this one.

The story time-jumps rather confusingly, but essentially covers the years from 1967 to 1976, climaxing with Saint Laurent’s triumphant “comeback” Moroccan-themed show of that year. Director Bertrand Borello confuses matters further by haphazardly inserting scenes taking place some 13 years later, in 1989, and casting another actor, Helmut Berger, for the elderly Saint Laurent. Berger is convincing in the role, but his scenes have no dramatic energy and tell us nothing particularly interesting.

But the first hour and a half sizzles. Obviously Borello is more inspired by the younger, more familiar Saint Laurent, who is played brilliantly by Gaspard Ulliel. If Ulliel was not already well-known as an actor, I would have sworn he was cloned directly from YSL’s DNA; a breathtaking resemblance. Also prominently featured are Jeremie Renier as Pierre Berge, and Louis Garrel as Jacques, the lover who nearly destroyed their relationship. The rest of the huge cast is uniformly excellent.

I haven’t seen any of Borello’s other films, but he demonstrates a bold imagination, and he takes some surprising risks. He painstakingly prolongs shots of beautiful people dancing to loud pop music in beautiful clothes but, against all the rules, I actually liked it. He packs his frames with gorgeous models in Saint Laurent’s creations, once again to excess, but I was never restless. He also lavishes much screen time on nudity and sex, all of it male but, again, it doesn’t seem gratuitous because Ulliel makes Saint Laurent such a seductive, mysterious presence, yet always vulnerable and human.

Wait. I guess you’d have to say some of it is gratuitous. Whatever.

One scene is typical: the camera picks up Jacques, who will become Saint Laurent’s lover, at a crowded dance club. The camera slowly pans back and forth between them while they only look at each other from across the dance floor, which is packed with revelers dancing in, and probably from, ecstasy. Yet it doesn’t seem ridiculous or affected, probably because the shot conveys the very obsessiveness we’ve already come to associate with Saint Laurent. He is hopelessly obsessed with beauty; he can never get enough, and it forms the basis of his tragedy and his genius.

So the subjects are beauty, fashion, sex, drugs and music, all mixed together and ravishingly filmed. As you might expect, the dialog is unimportant, and it’s treated that way. But, interestingly, the two scenes where dialogue does count are the most memorable in the film. In the first, Saint Laurent’s lover and lifetime companion, Pierre Berge, is in a business meeting with Saint Laurent’s two American investor-licensees. The only woman present is the French-English interpreter. We see the extent of Pierre’s involvement with his lover’s business interests; it is thorough and unwavering. The back-and-forth with the licensees, especially the younger American played by Brady Corbet (riveting in a brief role), is oddly absorbing. We don’t need to understand the details to maintain interest; the intense verbal combat has an almost abstract elegance.

Even better is a scene in the salon. A pretty woman, just entering middle age, is grateful, and a little nervous, that Saint Laurent is personally attending to her fitting. But she does not think the outfit flatters her, and she tells him that, hesitantly. Then, with quiet, sensitive command, Saint Laurent deals with the problem. He advises her on the placement of jewelry, her walk and even her hair. With each adjustment, the woman (Valerie Bruni Tedeschi, simply wonderful) becomes more confident and alluring. The dramatic point is brilliantly made. Anyone can design beautiful clothing. But only haute couture can style the clothing to become inseparable from the beauty of the woman wearing it.