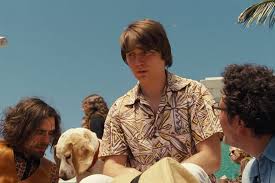 Paul Dano as Brian Wilson in “Love and Mercy”

This is a biopic of Brian Wilson of the Beach Boys, directed by Bill Pohlad, and written by Oren Moverman and Michael Alan Lerner. While it is intensely involving and convincing, it is more unsettling than fun to watch. In fact, it is likely that the more you love their music, the more depressed you’ll be after seeing it.

It’s ironic but I can’t say that the story the filmmakers chose to tell could have been told better. While the flip-flop of moving back and forth between the younger and older Wilson was awkward and annoying, the fact is that each story, if told separately, would not have been more satisfying anyway. True, Paul Dano (younger) and John Cusack (middle-aged Wilson) don’t really look alike, and neither looks very much like Wilson himself, who appears in the closing credits singing the title song. And yet each actor strongly personifies a brilliant, tortured character, and there is nothing lost dramatically by both actors playing the same role.

We know the facts, generally, and they aren’t pretty. As an adolescent, Brian channeled his  insecurity and self-loathing into a furious quest to transform pop music into a genuine art form, one that could be as personal and revealing as abstract expressionism. And also make him and his family a ton of money. 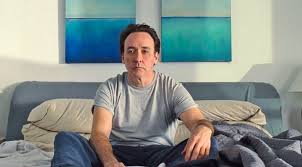 John Cusack as Brian Wilson in “Love and Mercy”

There seems to be no reason why his life would not serve as the subject for an entertaining biopic of a famous musician. Well, yes, there is one. While musical biopics from Yankee Doodle Dandy to Jersey Boys have benefitted from a standard formula – basically extract and sanitize – Brian Wilson’s life resists that treatment. To be frank, the person we see on-screen doesn’t seem to have had a single happy moment in his life. Even at the recording studio, where he basically tyrannized the musicians into reproducing the “sounds” that invaded his mind, his success wasn’t restorative. Even the earliest, most popular Beach Boys songs were the product of his isolation; the later ones – so brilliantly original and experimental – were even more dependent upon introspection.

But the filmmakers were tempted – unwisely I think – because the story of Wilson’s escape from his dominating therapist – a truly frightening Paul Giamatti – and his eventual marriage to the woman who fought to free him, at least follows the arc of the proven formula, which always ends in triumph. Unfortunately, the film never gets to show that. After two hours, we only get end titles that tell us of Wilson’s court victory and his happy marriage. But none of that overcomes the memory of Cusack’s Wilson as a creepy wreck, or the implausibility of the gorgeous Elizabeth Banks falling in love with him. The repeated explanation that she had been “hurt” in a former relationship doesn’t jibe with the sophisticated Cadillac saleswoman we see.

In short the story is a downer. Sure, Wilson is alive and, supposedly, “cured”, but he has long since abandoned any commitment to exploring the possibilities of music, which is, after all, why he is an important artist. Contrast this with Shine, for which Geoffrey Rush won a best actor Oscar. His character, David Helfgott, was also a musical genius – a classical pianist – with extreme social dysfunctionality. But, sanitized and saccharine as it was, the film’s development to a rousing, triumphant climax was true-to-form, and audiences responded.

I should mention that there are fine performances throughout. A standout scene has Giamatti talking to a visibly repelled Banks as she gets into her car. His obliviousness to her discomfort is both subtle and scary.