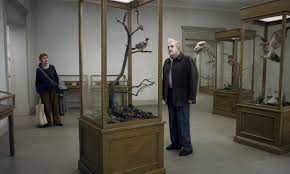 This film won the Golden Lion (Best Film) at last year’s Venice Film festival. It is the last film of a trilogy by Swedish director-writer Roy Andersson, but the only one I’ve seen. But reviews seem to regard it as stand-alone, with little from the first two films that are needed for its full appreciation. Be prepared for a weird yet ultimately rewarding experience, a film that is at times maddeningly opaque, and yet one that summons associations with countless precursors in its existential despair. However, its pleasures are somewhat dimmed by pretentiousness.

Set in a contemporary Sweden of stifling drabness, it is composed of 39 vignettes, with only one (King Charles XII) lasting more than 3 or 4 minutes. The camera never moves. It stays fixed on a scene, usually indoors, where the actors stiffly move about and address each other in rather formal language. Nobody is happy about anything. When infants are shown, they seem cared for, but ignored. A young girl stands on a balcony, alone, blowing bubbles. Otherwise, the actors are often slovenly, unprettified adults whose strongest emotion is a rather listless annoyance with life in general.

The only recurring characters are Sam and Jonathan, a pair of weary, middle-aged salesmen who sell party “gag” items, which they carry in a suitcase. They approach potential customers with either a glum hostility (Sam) or a pleading sadness (Jonathan), and are uniformly rebuffed. Their only actual customer is a shop-owner who never paid them, and probably never will. As a result, their landlord is threatening to evict them for rent arrears.

After awhile, the schema is clear: all relationships are based on dominance/submission. Among them, Lotte, a crippled tavern owner, gets young men to kiss her for free drinks; an Amazonian flamenco teacher openly fondles a handsome student; a modern-day tavern is suddenly time-warped into the 18th century when King Charles XII and his staff, on horseback, invade it and commandeer free service on their way to the battle of Poltava. Most prominently, Jonathan is continuously insulted and verbally abused by Sam.

While Andersson can tantalize and amuse, in a mordant style, no unifying theme emerges until, late in the film, the action stops cold, and the subtitle “homo sapiens” appears. Two unforgettable scenes follow: the first, set in an animal research laboratory, will be remembered in nightmares. The second, less shocking but still disturbing, depicts the mass killing of African natives.

At that point, we return to Jonathan. He is awake in his room, trembling in horror. He tells Sam that something has happened for which forgiveness is necessary, but he can’t say from whom, or for what crime. No further explanation is made. The film ends at a bus stop, where several people discuss the importance of knowing what day of the week it is.

That ending is the clearest reference to Samuel Beckett, but his spirit, and gloom, seem to permeate the entire film. Some of the episodes are obvious (a heart attack trying to open a bottle of wine) or just throwaway (a young couple making out on the grass). Only one – the flamenco class – made me laugh outright. The cast has professional poise, which is about right for a moderately entertaining, if didactic, pageant. But if I’m not quite enthusiastic about the film, I appreciate its formal elegance and unflinching irony.