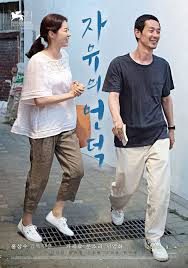 The director is South Korea’s Hong Sang-soo. This is the first film I’ve seen of Hong’s, but the eighth of this artist at the festival. It’s also the only Asian film to be shown this year.

To discover a new artist with a distinct style is always a delight. The rather misleading title is actually the name of the coffee shop where much of the film takes place. It is a short, simply filmed story that is so relaxed and unpretentious, you can almost imagine yourself as a visitor to a different country, just like its hero, Mori. Mori is a Japanese man who has returned to Seoul to convince Kwon, a woman he used to work with in Seoul, to marry him. The story begins when Kwon is given a batch of letters Mori has written since his return to Seoul.  He couldn’t find her when he arrived two weeks earlier, so he wrote of his experiences during that time. But Kwon drops and scatters all the letters, which are undated, so she doesn’t know the order of events when she reads them. The film we see is in that same dis-order, and the fun is in re-arranging the story – which is entirely about Mori’s relationships with the people he meets – so that the disjointed narrative starts to fall in place.  The motley crew includes his landlady, her unemployed cousin, the hostess of a coffee shop – with whom he has a brief affair – and others who pass through his life while he searches for Kwon. As played by Kase Ryo, Mori is a knockout charmer, and it seems that everyone he meets is competing for his attention.

The film kept me smiling throughout, even though its credibility is not airtight. As innocent as Mori is, I find it hard to believe he’d write the things he did if he wanted to win a woman’s heart. But you’ll see how it turns out.

All of the actors created finely etched characters, and worked as a smooth ensemble. Hong is obviously very assured as a filmmaker, and told the story with artful simplicity. And just from this one film, I can see why Hong has so many fans. His view of human nature is comforting and positive, not sentimental in the least. His is truly a unique voice. I would fly to Seoul just to have coffee with him at “Hill of Freedom”.